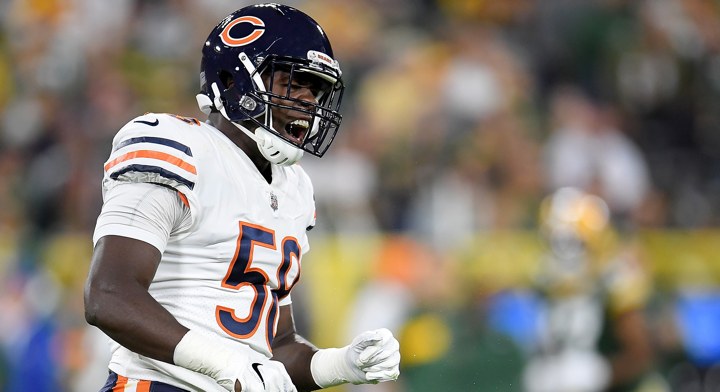 Roquan Smith and Joel Iyiegbuniwe enter the third seasons of their respective rookie contracts, as both were members of the Bears’ 2018 draft class. Josh Woods was an undrafted free agent signee from that same class, too.

Danny Trevathan is a seasoned veteran with Super Bowl experience whose non-stop motor, consistent drive, and locker room presence made him a force in the Bears’ rebuilt defense. Injuries kept him from playing a full 16-game schedule in all but one year with the team, but he was an impact player whenever he was on the field.

Nick Kwiatkoski is one of GM Ryan Pace’s middle-round draft-weekend success stories. A fourth-round pick in 2016, Kwiatkoski has done everything the Bears have asked of him at a high level. He has been a solid starter, a key reserve, and a special team’s ace. Heck, Kwiatkoski even caught a two-point conversion once. Between his perceived floor, age, and possible upside, Kwiatkoski is lined up to get paid handsomely by someone this offseason.

Kevin Pierre-Louis also spent some time starting at inside linebacker last season, performing admirably to the point where he is considered as worthy of consideration of a starting gig next year if he is re-signed.

There is no fat to trim here. Year 3 of Smith’s rookie deal comes with a cap charge of $5,039,227 — or the 21st highest number among inside linebackers. Smith’s money represents just 2.35 percent of the team’s cap and 1.18 percent of its cash spending. In short, this is a bargain of a deal.

In an ideal world, Iyiegbuniwe would have played himself into a position to start next to Smith in 2020 with Woods sliding up into a primary backup role. But that isn’t the case, as both Iyiegbuniwe and Woods have spent more time on special teams than they have at linebacker.

So, where do the Bears go from here?

They could re-sign Trevathan to the type of short-term deal players entering their 30s receive. Kwiatkoski could get a multi-year pact, one that would be deserved after his growth as a player in the system. Pierre-Louis could be a stop-gap option until a long-term option becomes available. Should the Bears allow Kwiatkoski and Trevathan to leave and sign deals with other teams this offseason, the Bears could position themselves to re-coup compensatory draft picks in 2021 if they don’t go hog-wild on the free agent market themselves.

In any case, the Bears probably need to draft a linebacker as a long-term starting option. Or at minimum, to address their depth concerns. Jordyn Brooks of Texas Tech popped up as a second-round possibility in a recent mock draft we shared.

Getting a feel for how high of a priority addressing inside linebacker should be isn’t as easy as I would have thought prior to doing this exercise. Because not only do the Bears have to bring in a starter next to Smith, they also need to find depth behind him on the depth chart. Last year, the Bears were deep with Kwiatkoski and Pierre-Louis waiting in the wings when Smith and Trevathan went down with injuries. As of right now, the Bears do not have that luxury at their disposal.

Hence, the low-key need to address a position that was a strength last year before it becomes a weakness in the years to come.