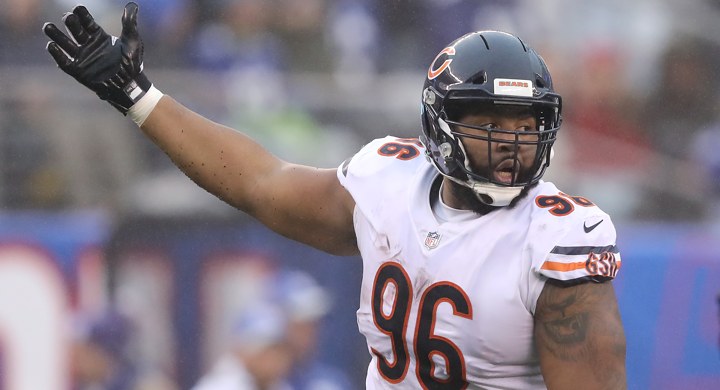 The Bears still have the core of one of the league’s top defensive lines. Defensive end Akiem Hicks and nose tackle Eddie Goldman are anchors at the peak of their powers. Bilal Nichols, a two-year starter, has carved himself a niche on the front lines as a quality rotation player. Abdullah Anderson is also under contract for the 2020 season, though his snaps were limited in 2019. If his snaps remain limited in 2020, it probably means Hicks and Goldman were healthy (and that would be wonderful news).

A reason this position group has been a strength for the Bears in recent years is because of the depth that allowed for a rotation of fresh linemen to keep up the attack. Credit GM Ryan Pace and members of his front office for finding quality depth pieces. And give kudos to coaches for building them up. But those guys are going to have to go back to work as Nick Williams, Roy Robertson-Harris, and Brent Urban are set to hit free agency.

Robertson-Harris is a restricted free agent, which means the Bears would have the right to match any deal that comes through the door.

Technically speaking, the Bears could cut Hicks in a move that could create $8.8 million in cap space at the cost of just $3 million in dead money. But doing so would cause a riot of ridiculous proportions (cutting the heart and soul of your defense during a competitive window would be the most ill-advised move in the history of a franchise). And after seeing what the Bears defense looked like without Hicks, my preference is to never see it like that again. Ever.

Realistically speaking, there is no one who could be cut at this position group who could create considerable cap space. The end.

The Bears are set at the top of the depth chart with Hicks and Goldman. Nichols also fits his role as a rotational lineman quite nicely, even as he played through a broken hand last year. HOWEVER, the possibility of losing two key rotation pieces means bolstering the back end will make its way onto the to-do list at some point this offseason.

To be clear, Chicago could work to bring back Williams and Robertson-Harris this offseason. And that would be fine. But should the Bears seek out options in free agency, it is notable that this position group is one of the deepest. Chris Jones (Chiefs) is going to get a boat-load of money, but he is just one of 16 interior defensive linemen among PFF’s top-100 free agents. Like I was saying, this group is loaded with options.

An alternative option for Chicago would be to try to strike in the draft, where the team has previously unearthed gems such as Goldman and Nichols outside of the first round. Perhaps a defensive lineman such as Ross Blacklock (TCU), Raekwon Davis (Alabama), or Rashard Lawrence (LSU) could be on their radar come draft weekend.

But make no mistake, ensuring that this position has quality and depth (to go along with quality of depth) by the time training camp rolls around would mean everything for a defense that showed how much it missed Hicks when he went down for an extended period.