According to the Scientific Findings of a Madden Simulation, Tom Brady and the Bears Are an Ideal Fit Skip to content 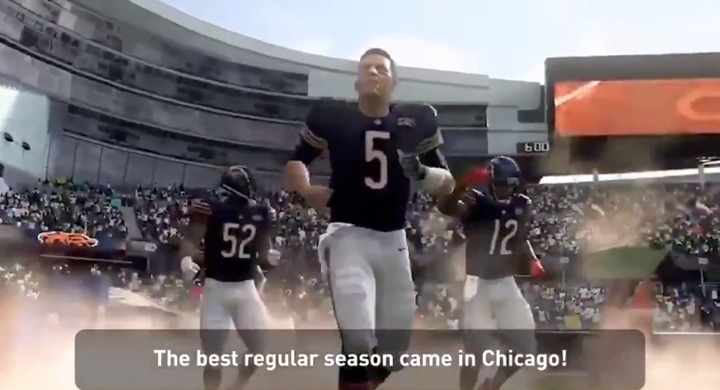 Unless the Bears have a trick up their sleeve, a rabbit in their hat, or some other magical way to create ample salary cap space (Michael: A pigeon in their pocket?), the idea of Tom Brady quarterbacking in Chicago is nothing more than a crazy dream – one we’ve discussed once already after a lead NFL writer laid out the path.

But to take it a step further, CBS Sports’ “Pick Six Podcast” simulated a season in which the Bears (and the NFL’s other 31 teams) had Brady under center using the Madden NFL ’20 video game. As you might expect, things go swimmingly well in Chicago.

Check it out (h/t Twitter use Sam Knepper for the heads up):

Who would have the best 2020 season with Tom Brady at QB?
We simulated Madden 32 times to find out. pic.twitter.com/jxNE33oFXZ

Not sure if it’s more jarring to see Brady in a Bears uniform or wearing the No 5. But in any case, Brady destroys the Bears’ record books in this simulation. Brady throws for 4,800 yards and 47 touchdowns. I don’t care what number you’re wearing under center, those are some good stats.

It would be a historic showing for the signal caller approaching his mid-40s to reach those highs with a franchise who has never had a quarterback throw for more than 4,000 yards or more than 40 touchdowns. And that the Bears go 13-3 and take home the No. 1 seed in the NFC is the type of stuff that might make a Bears fan willing to risk it all for one shot at glory. But the simulation ends with the Bears losing in the NFC Championship Game, at home, which is just too cruel to think about after the simulated good times that led up to the let-down.

So is it good news that this simulation is unlikely to happen? I’m so torn.

In the end, once the game of musical chairs comes to an end for this offseason’s quarterback market, it could very well be revealed that this spring’s changes will have changed the NFL landscape moving forward. Who will be sitting where is yet to be determined, but it’s difficult to imagine Brady and the Bears becoming a thing. At least we’ll always have the Madden simulation!