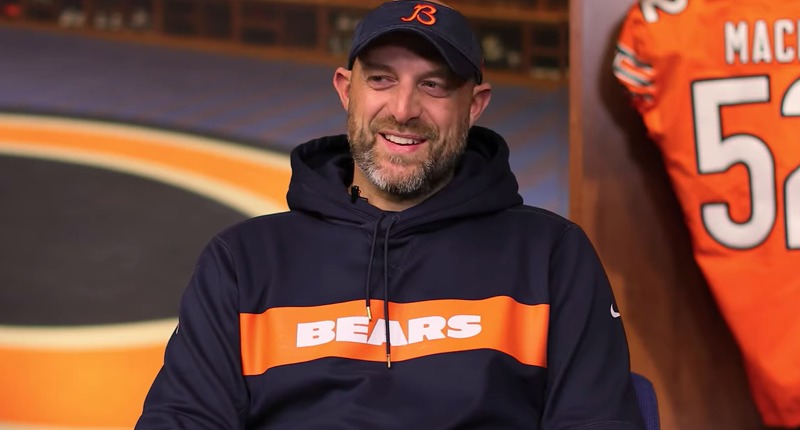 As of now, Mitch Trubisky is the Bears starting QB for 2020. But with (1) a vacuum behind him on the depth chart, (2) a good enough chance at returning to the playoffs in 2020, and (3) just one year left on his rookie deal, the Bears need to seriously consider everything they can do to improve the most important position group in the game. Unfortunately, they don’t have a ton of draft capital or cap space to work with this offseason (though the latter could be stretched), which means they’ll have to get creative as they address the position this spring.

Albert Breer of SI.com’s The MMQB has an idea that I’d like to discuss, but not entirely for the substance of the proposal, itself. Because while the idea is fine – we’ll get into it here shortly – the implications for Matt Nagy are quite complimentary, welcomed, and borderline optimistic after a disappointing centennial season in 2019. Let’s just get into it.

In short, Breer wonders which team will pull a (reverse) Titans and develop Marcus Mariota this winter, and mentions the Bears are a reasonable destination, in part because of Nagy.

Like Mariota, Tannehill was a quarterback drafted inside the top-10, who had an uneven time with the team that selected him, before moving into a situation where everything clicked. Breer argues that Mariota still has mobility and accuracy of a successful quarterback, but could use a new development plan. He also adds that Mariota could be the right option for a team that does not want to (1) court Tom Brady, (2) sacrifice mobility for Phil Rivers, (3) roll the dice on Jameis Winston, or (4) pull off a trade for guys like Nick Foles or Derek Carr.

Enter Matt Nagy and the Bears, who check more than a few of the boxes above:

“There are coaches out there—cough, Chicago, cough—who could slide him in easily under the guise that Mariota is a high-quality backup and develop him into a weapon under center who can take over when the starter falters.”

Setting the idea of Mariota to the Bears aside for a second, I’m pretty heartened to see someone from outside the organization show this much faith in Nagy’s developmental skills – or, at least the new quarterback incubator (featuring Nagy alongside new OC Bill Lazor, QBs Coach John DeFilippo, and Passing-Game Coordinator Dave Ragone) – as Breer is here.

Because while Nagy was the talk of the town this time last year (newly minted as the NFL’s Coach of the Year), the 2019 season saw Trubisky regress, the offense take a tumble, and the Bears celebrate their centennial season with an uninspiring 8-8 finish. Worse, Nagy’s play-calling was uneven and came into question throughout the season, as the in-game decision-making didn’t seem nearly as bold or progressive as it had in the past.

And that – in part – led to a vocal, disenchanted segment of the fan base calling for change. However, change isn’t happening – at least not this offseason, not when Nagy has built up good will by winning 20 games and making the playoffs within his first two seasons (the previous regime won just 14 games over the span of three years).

And yet, there is still hope. Hope that Nagy can right the ship and get the Bears back into playoff contention. And even hope that he could possibly fix a broken quarterback prospect – perhaps just not the one you’ve got in mind.

Matt Nagy and the QB incubator will have their hands full with Mitch Trubisky this season, to be sure, but the possibility of upgrading the backup position with someone who could take over should he falter *while* not overtly threatening Trubisky for the starting job early on seems ideal for a team that wants to keep its once-prized draft pick’s confidence in line and compete for the postseason, even if the QB play is uneven to start.