Bears Reportedly Looking at QB Options, Would Be Interested in Derek Carr (If He Became Available) Skip to content 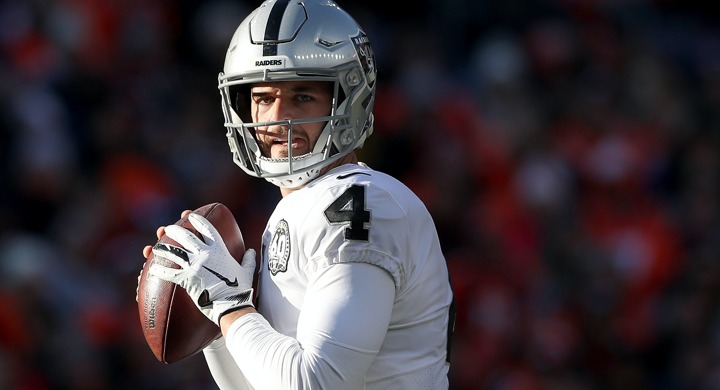 I’m not ready to go on an Obsessive Derek Carr Watch just yet, but the timing surrounding Carr-related trade rumors and a curiously timed IG post featuring a beloved ex-teammate who happens to play for a team that could consider shuffling the deck under center has my Spidey Senses tingling.

And that’s all before this, from NFL insider Benjamin Allbright:

Trubisky will still get the shot to be the guy, but much like Titans/Mariota last year, the leash is short.

They'd prefer vet ready-to-play, options. If Raiders were to move on from Carr ($21.5m cap hit vs $7.9 dead) theyd be interested.

Allbright’s nugget about the Bears being interested in Carr if the Raiders were to move on from him is going to catch eyes for obvious reasons. Carr is a proven quarterback whose contract, while still large, looks like a bargain compared to others at the position. Think about it. In 2017, Carr signed what was then the largest deal in league history. Now, as we enter the 2020 season, Carr’s cap value is 10th among quarterbacks. That’s how rapidly things are changing at the quarterback position.

Instead, our focus should be on the first line of Allbright’s tweet:

This is the most important aspect of the tweet, folks. Not necessarily whom the Bears are looking at, but that they are looking and in relative silence.

For what it’s worth, this wouldn’t be the first time the Bears operated in stealth mode in search of a quarterback. Just think back to their pursuit of Mitch Trubisky in the 2017 NFL Draft. Chicago ran all sorts of misdirection plays – such as signing Mike Glennon or GM Ryan Pace going undercover to watch Trubisky’s college games – in the team’s pursuit of a long-term quarterback solution ahead of the draft.

That the Bears would be discreetly looking at quarterback options to fill out the depth chart shouldn’t be a surprise. Sure, they made a commitment to roll with Trubisky as the starter for 2020 back in December. But they did so while alluding to building competition on the depth chart behind him. And in the time that has passed since Chicago’s season-ending press conference, a consensus has started to grow around the idea of the Bears inviting competition to push (or even supplant) Trubisky. Obviously, if they were to go for a more talented QB like Carr, the nature of that relationship/those plans would evolve.

After seeing what the Titans did with Ryan Tannehill taking over for Marcus Mariota, GM Ryan Pace would be wise to cover all bases in case the Trubisky thing goes off the rails in 2020. Not just as an attempt to get it right at the position, but to properly squeeze the most out of what was expected to be a year part of a competitive window.