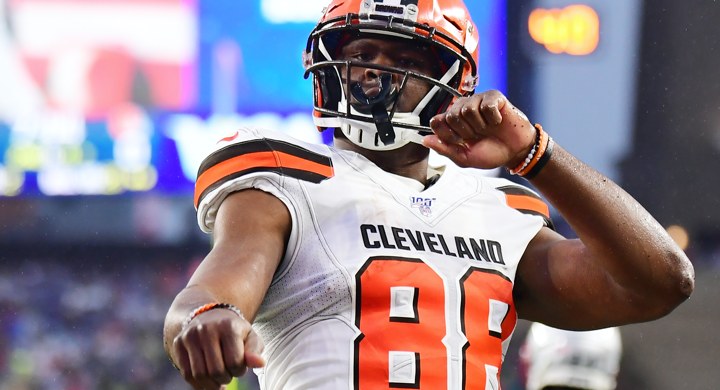 The Chicago Bears have a tight end problem.

Last year’s unit wasn’t healthy enough to give it a full go. The top three guys on the depth chart (Trey Burton, Adam Shaheen, Ben Braunecker) each ended the season on injured reserve and missed a combined 21 games. That’s far too many. And unfortunately, the players who were healthy enough weren’t productive enough – hence, Chicago started addressing its tight end problem long before the start of free agency.

Late last week, the Bears signed Demetrius Harris — a player whose strengths include durability (he’s missed two games in the last five years) and availability. Harris is a fine complimentary player with starting experience as a pro, a knowledge of Matt Nagy’s system, and has spent time at both “U” and “Y” positions. At 6-foot-7, Harris is also a sizable red zone target (should the Bears offense venture into the red area in 2020) who is an accomplished blocker who could slip into a pass pattern when called upon.

Remodeling the tight ends room had to start somewhere, and signing Harris represents a noble first step in the process. But if the Bears are going to properly do the thing, they would be wise to do so while getting ahead of the curve.

And to that end, former NFL agent Joel Corry foresees a banner offseason for NFL tight ends. Jimmy Graham set the market for free agent tight ends in 2018, but that number will certainly be lapped in short order. George Kittle and Zach Ertz will get big-money contracts from their respective teams down the line, but not before free agency raises the bar a tad.

Austin Hooper (Falcons) and Hunter Henry (Chargers) are free agents who could land top-dollar deals to reset the market. Dan Durkin of The Athletic explores how Hooper (here) and Henry (here) could be worth bringing into the fold as the Bears’ search for a more dynamic, pass-catching option at tight end begins anew this offseason. Meanwhile, Anthony Treash (PFF) predicts the Bears will be the landing spot for Eric Ebron, a tight end who has hinted at having some interest in playing in Chicago.

Should the Bears decide against diving into the free agent market (again), this draft class has numerous intriguing options.

There isn’t a clear-cut No. 1 tight end just yet, but Hunter Bryant (Washington), Cole Kmet (Notre Dame), and Brycen Hopkins (Purdue) are in the running. Thaddeus Moss (LSU), Albert Okwuegbunam (Missouri), Jared Pinkney (Vanderbilt), and Adam Trautman (Dayton) all have positive buzz surrounding them, too.

The Bears met with Pinkney, Hopkins, and Trautman during Senior Bowl week. Okwuegbunam, Kmet, and Bryant have been sent to Chicago in various mock drafts. And even if the Bears signed an (another?) option, it’s not difficult to imagine this front office double-dipping in an attempt to get the position right.

Because — if you put aside your thoughts and feelings regarding the quarterback position for a moment — you can’t guide me to a place that needs more help than the Bears’ tight ends room.

OK, I hear your concerns regarding the offensive line. Believe me. That is an area of need that should be a high priority this offseason. Heck, that the Bears are without a right guard is a cause for concern on its own. But that unit features two players (Cody Whitehair, Charles Leno Jr.) removed from being Pro Bowlers, a young interior lineman (James Daniels) whose stock is on the rise, and another tackle (Bobby Massie) who was equal parts durable and dependable until late in the 2019 season. Has the Bears tight ends room reached the heights of success that the team’s offensive line? No. The answer is simply no.

And that’s why there is more movement coming to the Bears’ tight ends room.