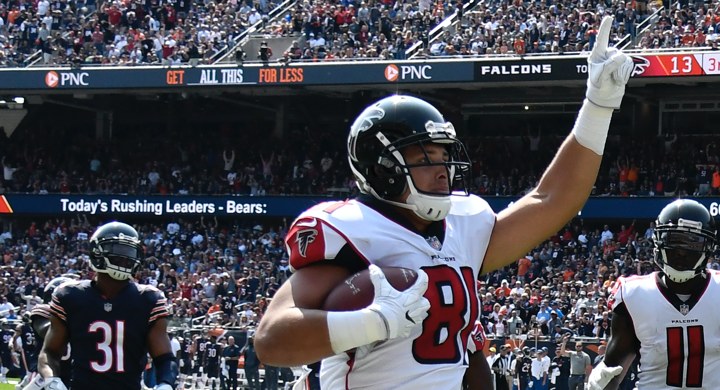 The best free agent at one of the Chicago Bears’ biggest positions of need is set to hit the market.

The #Falcons are planning to allow starters TE Austin Hooper and De’Vondre Campbell to test free agency, GM Thomas Dimitroff said today. The likelihood is that both players receive large deals in free agency, but Atlanta hasn’t ruled out keeping them for the right price.

Tight end Austin Hooper is going to hit free agency untethered by any active negotiations, Franchise, or Transition tags, according to Falcons GM Thomas Dimitroff on Tuesday during his media availability at the Scouting Combine. Hooper has made back-to-back Pro Bowls and has improved in each season in the pros.

Check out this progression:

As Hooper’s production has improved, so has his playing time. Going from 38.9 percent of offensive snaps as a rookie, to 76.9 percent as a second-year player, and staying in that vicinity in Year 3 with a 76.3 percent snap share is worth noting. Hooper would have been around that same number as a fourth-year player had he not missed three games in November due to a knee injury. Even still … the arrow is clearly pointing up on Hooper, who is 25 and won’t turn 26 until November.

The Bears aren’t he only team that could seek out Hooper in free agency. But few teams have the glaring need at a position that has proven to be a revolving door of disappointment for a number of years now. And now that the Bears have an estimated $26 million in cap space, it is easier to envision the team dipping into the deep end of the tight end pool again (even if the last time Chicago shopped on the top shelf, they did so and landed Trey Burton).