Move Over, Bears - Colts Reportedly Want in on the Derek Carr Sweepstakes Skip to content 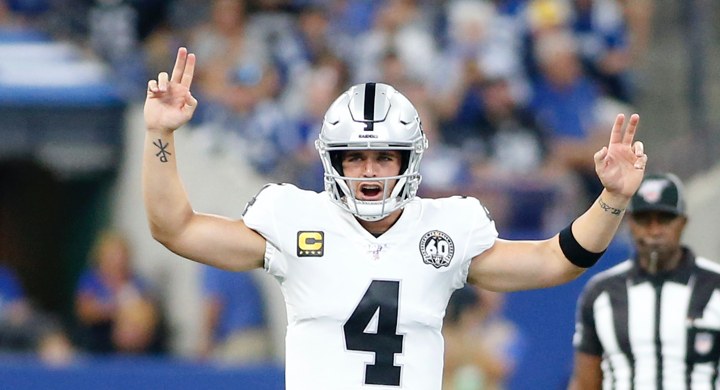 If you thought Bears GM Ryan Pace cornered the market on non-committal commitment, then you probably didn’t get a load of Raiders GM Mike Mayock.

When discussing the future of quarterback Derek Carr, Mayock took non-committal commentary to another level:

Raiders’ GM Mike Mayock on Derek Carr: "Derek played at a high level last season. I'm very happy with Derek. But as I've said before, we will evaluate every position on our roster and if there's a chance to upgrade, we will look into that."

Mayock is so happy with Carr, he is willing to make upgrades if one is out there to be had. Surely, that is going to sit well with Carr — who on top of being one the franchise’s longest-tenured members, has his face, likeness, and jerseys floating all around Las Vegas as the franchise makes its move from the Bay Area to the Vegas Strip.

The Bears have been loosely linked as being somewhat interested in Carr (should he become available). HOWEVER, they aren’t the only team reportedly looking from afar and keeping tabs on the situation:

Derek Carr to the #Colts? @HolderStephen says watch out for that possibly happening.

“I’ve been told to keep an eye on Derek Carr and that situation as it relates to the #Colts. … I’ve been told the #Colts are willing to have a conversation about that.” pic.twitter.com/SrL6S10ZdT

“I’ve been told to keep an eye on Derek Carr and that situation as it relates to the Colts,” said The Athletic’s Stephen Holder, via the Locked On Network’s Colts podcast. Holder has been told the Colts “are willing to have a conversation about that.”

And why wouldn’t the Colts want in on that situation? Indianapolis has one of the league’s best offensive lines, loads of draft capital, a ton of usable cap space that could be shelled out in free agency, and a quarterback situation that is hardly settled. Because, even after signing Jacoby Brissett and Brian Hoyer to modest deals, neither is locked in as QB1.

Even if the Bears aren’t in on Carr, what happens with him, the Raiders, and the Colts is worth monitoring. If the Colts make a move to grab Carr, it would leave the Raiders in a spot where they could take someone off the top end of the free agent market (or perhaps they already would have), and the entire QB market could wind up impacted.

Vegas has previously been connected to Tom Brady, but NFL Network insider Ian Rapoport mentions the Raiders and Colts as possible landing spots for Philip Rivers. Of course, the Raiders can’t bring in Rivers with Carr in the fold. But if the Colts were to snag Carr, that would put the Raiders in a place to pluck Rivers as a free agent. All things considered, both the Colts *AND* Raiders potential pursuits of offseason quarterback changes are going to be important to keep up with as the offseason continues.

The game of quarterback musical chairs could just be getting started.