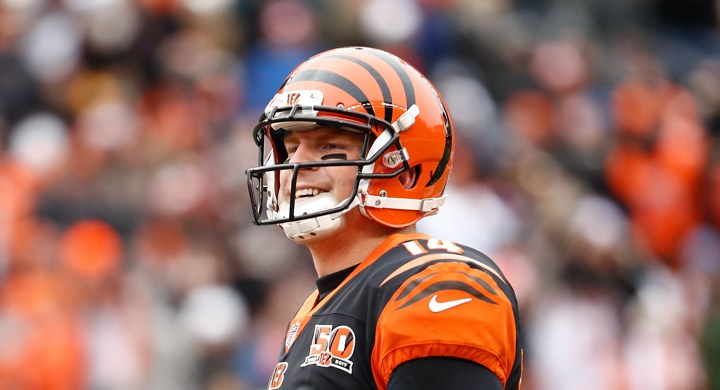 The Chicago Bears have been loosely connected to Andy Dalton for quite some time now.

That connection is a bit firmer today.

Paul Dehner Jr. of The Athletic reports the Bears “have been in touch” with the Bengals when it comes to talking about trading Dalton. Dehner goes as far to call Chicago “the first and most obvious” of the “logical suitors” when it came to those talks. The other team is the Patriots, who would make a ton of sense as an option should Tom Brady leave New England for a new football home. But for the sake of this post, let’s stay focused on the Bears — a team that has been non-committal in its commitment to Mitch Trubisky and is reportedly in the hunt for a veteran presence at QB.

Dalton makes sense as a potential Bears target, in that regard.

In November, a way-too-early prediction pegged Chicago as a landing spot for Dalton for the 2020 season. In December, another insider declared Dalton as a fit for a re-worked Bears quarterbacks room. Fast forward to the middle of January, when the Bears hired Bill Lazor to replace Mark Helfrich as offensive coordinator — a move that had us wondering if it had anything to do with a possible pursuit of Dalton. After all, the two worked well together while in Cincinnati. Later in January, another NFL insider offered up another bold prediction that Dalton would be the Bears’ starting quarterback in 2020.

But trading for Dalton has its challenges. Among them, compensation going the other way.

Lindsay Jones of The Athletic hears from an NFL GM that the Bengals could command a second or third-round pick in a Dalton trade. Meanwhile, ESPN’s Adam Schefter said he expects a return for Dalton would be similar to what the Broncos sent to the Ravens for Joe Flacco, per Dave Clark of the Cincinnati Enquirer.

Last offseason, you may recall, the Ravens acquired a fourth-round pick in exchange for moving Flacco the Broncos. But unlike the Broncos, who absorbed the remainder of a contract that has cap charges of $23.65M and $27.65M over the next two seasons, Dalton’s deal is for only one year and $17.5 million. That’s far more palatable than Flacco’s deal. And for someone who has had success and familiarity with the system he would be going into, it could be viewed as a relative bargain.

So, yeah, a similar trade to what the Broncos and Ravens worked out would be sensible, but the Bears don’t have a fourth-round pick. Not now, anyway. They won’t have one until they are given a compensatory selection for the Packers signing Adrian Amos in free agency. In theory, Chicago could play the waiting game and pounce on signing Dalton as a free agent later in the offseason after Cincinnati drafts LSU’s Joe Burrow with the first pick in the NFL Draft. But if New England looms as a trade partner, that wouldn’t be a realistic possibility.

All this to say, the Bears could be faced with stiff competition in their pursuit of Dalton and could be pressed into sending compensation that might make them think twice about pulling the trigger on a trade altogether.