Re-Signing Nick Kwiatkoski is a Priority for the Bears ... But a QB Chase Could Complicate Things Skip to content 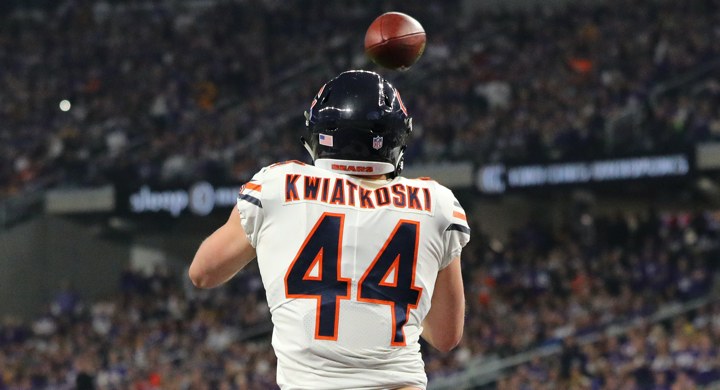 Difficult decisions are on the horizon for the Chicago Bears this offseason.

Among them: Figuring out what in the heck are they going to do at inside linebacker.

Chris Emma of 670 The Score reports that re-signing Nick Kwiatkoski is a priority for the Bears this offseason. But it doesn’t seem like *THE* priority of the offseason.

Instead, Emma writes: “The Bears’ offseason blueprint revolves around the position of quarterback.” With the hope that a new Collective Bargaining Agreement coming into place before free agency’s “legal tampering period” begins on March 16 would bring a higher salary cap and more spending money for Chicago to address its issues around the gridiron.

Among the non-QB priorities could be Kwiatkoski, a free-agent-to-be inside linebacker who has reportedly caught the Packers’ eyes as a possible target.

Kwiatkoski, 26, started eight games last season and 22 over the course of his four-year career with the Bears, proving himself to be a worthwhile plug-and-play linebacker (in addition to being a core member of the special teams unit). And because Bears GM Ryan Pace has shown a knack for re-signing home-grown talents (think Charles Leno Jr., Eddie Goldman, Cody Whitehair, Eddie Jackson), it isn’t a surprise that Chicago sees retaining Kwiatkoski as a key part of its offseason. It’s just going to be more of a challenge than one might otherwise expect.

And it’s not as if the team doesn’t have options. Instead of opting to re-sign Kwiatkoski to a lucrative multi-year deal, the Bears could choose to re-sign Danny Trevathan. The 29-year-old inside linebacker could be a more cost-effective alternative for a team that has other needs to address this offseason. Trevathan figures to have suitors when free agency opens up a little more than two weeks from today, but he played just one full 16-game season over the last four years with the Bears, which could scare some teams off from giving him a bigger and longer contract. If that’s how it unfolds for Trevathan, it could benefit the Bears’ offseason plans should they decide/be able to retain a respected veteran at a bargain.

To be clear, Chicago could conceivably keep Kwiatkoski or Trevathan. The Bears should want to keep Kwiatkoski, who has has done everything the Bears have asked of him at a high level since selecting him in the fourth round of the 2016 NFL Draft. And as an alternative, the Bears should absolutely want to retain Trevathan, a natural leader and well-respected member of locker room with a winning mentality.

But it is clear that Chicago’s front office has quite the balancing act to perform before reaching a decision on who to bring back. Because, as always, the quarterback position is what makes the NFL go ’round.

In the end, it all comes down to what happens at the quarterback position dictating the rest of the offseason. The cost of reeling competition for Mitch Trubisky will ultimately serve as the first domino that falls and gets the ball rolling for the rest of the offseason. That’s not quite where anyone envisioned the Bears would be at this time last year, but here we are on the cusp of what could be a serious shakeup in what is looking like a pivotal offseason for many.