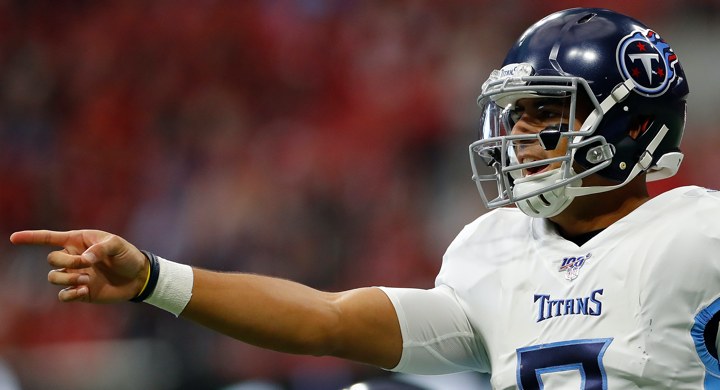 Good news: Extrapolating Mariota’s 2019 numbers as a starter over a full 16-game season would make them look appetizing to the naked eye. Because, without context, 3,144 passing yards, 19 touchdowns, 5 interceptions, and a 91.7 passer rating are modest, if not respectable numbers.

They aren’t Pro Bowl numbers, perhaps, but that 1.2 INT% pops out as a sign of someone who knows their limitations and values ball security.

Bad news: Mariota didn’t get to put up a full season’s worth of numbers because he was benched for Ryan Tannehill. After losing four of Mariota’s first six starts, the Titans went on a tear with Tannehill running the show and rode the wave all the way to the AFC Championship Game. So while the Titans look to run it back with Tannehill, Derrick Henry, and the rest of the gang, Mariota is left to look for a job elsewhere.

Mariota’s numbers aren’t inspiring, but the Titans posted winning records with him as a starter in 2016 (8-7), 2017 (9-6), and 2018 (7-6). Hey, the ability to game-manage your way to victory is what got Kyle Orton praise in Chicago and paid elsewhere. It’s one of the reasons Josh McCown is the Greatest Backup Quarterback™ to ever lace ’em up. The inability to do it is one reason why Rex Grossman was the most polarizing quarterback in franchise history until Mitch Trubisky came along.

The arrow seemed to be pointing up for Mariota in 2016. In addition to the 8-7 record he posted as a starer, he set career highs in passing yards (3,426) and touchdowns (26), while limiting interceptions (9) and posting a career best 2.0 INT%. It was good enough to get him named as a Pro Bowl alternate. And in the offseason that followed, Mariota was recognized by his peers as the 50th ranked player on the NFL’s Top-100 of 2017 list.

It’s a shame that Mariota’s 2016 season ended with a broken fibula that was suffered in Week 16. Things haven’t been the same for him since, but perhaps a rebound is in his future.

Mariota is PFF’s 14th overall free agent and seventh-highest ranked quarterback. His rookie contract with the Titans paid him an average of $6.05 million per year, included $24.2 million guaranteed, and came with a fifth-year option that paid him $20.9 million in 2019. It’s safe to say he won’t be getting a deal that will pay him that much this offseason.

OverTheCap.com doesn’t have a projected contract for Mariota, but we can take an educated guess based on contracts they have projected for quarterbacks in similar situations. For example, Case Keenum, 32, is a similar player to Mariota in that he could hunting for a backup role that could lead to a starting gig. Keenum’s projected contract is a one-year deal worth $11 million, but includes just $6 million guaranteed. Teddy Bridgewater, 27, is closer to Mariota in age, but PFF’s No. 19 free agent is likely to focus on nabbing a starter’s job with no strings attached. And yet, his projected contract is a two-year pact worth $18 million total and includes $10 million guaranteed. Something in the range of those deals could fit.

Connecting the Bears and Mariota in free agency would’ve been a layup had the Bears retained Mark Helfrich as their offensive coordinator. Helfrich was Mariota’s head coach at Oregon when he won the Heisman Trophy en route to becoming the No. 2 pick in the 2015 NFL Draft. It would have been an easy sell to reunite Helfrich and Mariota, but it wasn’t meant to be. Helfrich was fired at the end of the 2019 season and replaced by Bill Lazor in early January.

But just because Helfrich is gone doesn’t mean the Bears won’t have an interest in Mariota.

Bears GM Ryan Pace was reportedly interested in trading up to select Mariota in the 2015 NFL Draft. Years later, Matt Nagy — then the Chiefs offensive coordinator — got a first-hand look at what Mariota could do at full-strength when he engineered a rousing come-form-behind victory for the Titans in a road playoff game in Kansas City. Among the highlights, a touchdown pass to himself. So it’s not as if there aren’t reasons for Bears brass to be interested in Mariota despite the departure of his former coach.

Mariota is a sensible option for the Bears’ quarterback room. Mariota checks all the boxes of being a veteran quarterback (check), with extensive starting experience (double check), and a unique pedigree as a Heisman Trophy winner and No.2 overall pick (triple check).

I understand the failed No. 2 pick narratives would be unavoidable. I am also aware the two share representation via the same agency, and that said agency would probably prefer it if both of its prized quarterbacks had sure-fire starting jobs that came with starting QB money. But Mariota is looking for an opportunity. And the Bears are looking for help. Despite all the other noise, the fit is as obvious as it can get.