Given the Potential Cap Savings, How Safe is Leonard Floyd's Gig? Skip to content 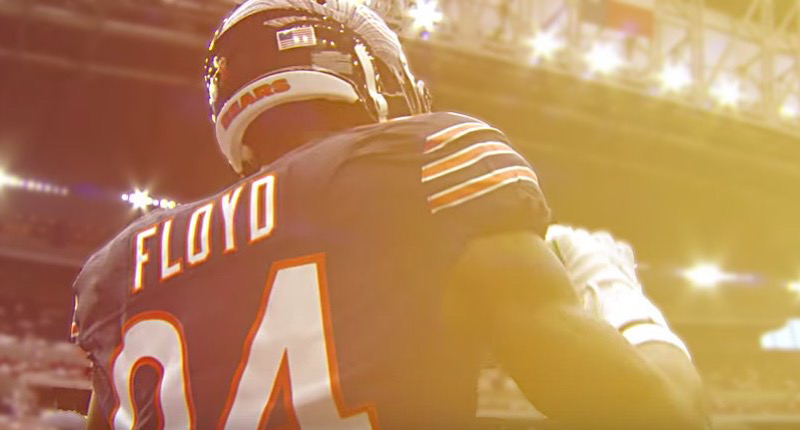 There is no secret that the Bears are going to be in the market for an edge rusher this offseason.

Khalil Mack and Leonard Floyd are the only two edge defenders returning who were on the team to open up the 2019 regular season. Isaiah Irving could be back if he re-signs as a restricted free agent. Even then, that leaves Mack, Floyd, one backup with limited snap experience at the position, and holes elsewhere within that position group. No wonder Chicago has reportedly met with at least six prospects, per Bear Report’s findings. To take it a step further, that much digging into the prospect pool has me wondering if the Bears will go beyond adding to what they have on their roster.

Is Floyd going to be a member of the Bears for much longer?

Adam Hoge (WGN Radio) addresses the elephant in the room otherwise known as Floyd’s contract. After picking up the fifth-year option on Floyd’s rookie deal last offseason, the Bears will pay the 2016 first-round pick $13.2 million at the start of the league year. But if they were to release Floyd before then, they would open up $13.2 million in cap space in a move that would bring their projected available spending space to $36,942,111 per OverTheCap.com’s estimations. Sure, it would open up a hole on the defense. But it would also free up money to fill it (and possibly other areas of need).

Don’t get me wrong. Floyd is a good player who does a bunch of things well within the confines of the defensive scheme. Indeed, it’d be wrong to overlook his contributions as a complementary defender with the run defense and pass coverage prowess that makes him a solid defender. But I just can’t get past that $13.2 million number without thinking about how much that is to pay for a player who doesn’t knock down the opposing quarterback at a high rate. Floyd’s inability to take advantage of having Khalil Mack and Akiem Hicks eating up extra attention en route to racking up big numbers and making game-changing plays is something I can’t get past when trying to pin down his future value.

Adam Jahns (The Athletic) writes the Bears are “at a unique crossroads” when it comes to Floyd. Like Hoge, Jahns points out that $13.2 million price tag, adding that the Bears like Floyd, “but don’t love him” at the cost of the fifth-year option.

Chris Emma (670 The Score) offers up an alternative idea to dropping Floyd outright and creating $13.2 million in cap space. Emma floats the idea of Floyd signing a team-friendly extension, one that would give the player some contract security while giving the team some much-needed cap space. It is an idea that is well-rooted in logic, but I can’t help but wonder why Floyd would sign that type of deal when (1) the salary cap could be getting a huge spike if/when the new CBA gets approved, ratified, and put into place before the start of the new league year and (2) the opportunities for him to sign a big-time money-making deal is just one year away. Though, there is one reason Floyd could choose to sign an extension.

If Floyd was to play out his final year with the Bears and enter free agency after the 2020 season, the first year of his next deal will come at his age 29 season. Floyd entered the league as a 24-year-old rookie in 2016, which puts him on the older end of the age spectrum. And there isn’t much of a history of edge defenders who get paid big bucks despite their inability to pick up quarterback sacks. Not to say there isn’t a market for edge-setting defenders who play smart, complementary football as run defenders who can drop into coverage in a pinch. But those guys don’t get paid what pass-rushers do.

It always comes back to the Bears in need of help in the pass-rush department. Having Mack on one side should keep Chicago from being desperate in its search, but finding someone to line up on the opposite side of the All-Pro appears to be something that should be prioritized. Drafting that player would make the most sense, especially since the Bears have met with a number of those prospects while at the Scouting Combine. Perhaps the team would rather go on a search for the next Shaq Barrett and find an undervalued/overlooked defender who needs a change of scenery. Or maybe a combo plan that uses the draft and free agency is the right way to go about plugging holes.

In any case, the Bears have a hole, but no easy way to fill it. With that in mind, it makes me wonder if standing pat, kicking the can down the road, and addressing the long-term options at the position is the play here. There are options, to be sure. But that slam-dunk case just isn’t there right now. Of course, things can change between now and the 16 days that will pass until the new league year opens up.