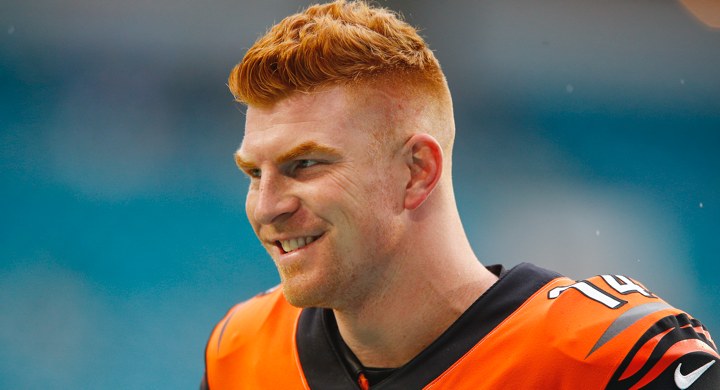 Not too high. Not too low. What you see is what you get. That’s the Andy Dalton way!

Dalton has three Pro Bowl seasons, two years with at least 4,200 passing yards, and a 30-touchdown passing campaign under his belt. I guess this is the place where I mention that no Bears quarterback has ever thrown for more than 4,000 yards *OR* thrown at least 30 touchdowns in a single season. This is what we’re up against, people. This is why the Bears are executing a search for veteran quarterback help.

Dalton’s 2020 cap charge is $17.7 million, per OverTheCap.com. It’s a hefty number, to be sure, but it comes in the final year of a six-year, $96 million contract extension he signed back in August 2014. Taking on a one-time hit before clearing the decks for a long-term solution might not be the worst idea in the world. But in order for that to happen, a deal must be struck between two sides.

Last offseason, the Broncos sent a fourth-round pick to the Ravens in exchange for quarterback Joe Flacco and whatever was left on the mega-deal he signed with Baltimore. That would be the baseline for a Dalton deal, except the Bears don’t have any fourth-round picks. Further, the Bengals could counter with an argument that points out that getting Dalton on a one-year $17.7 hit is more team-friendly than the Ravens-Broncos deal that left Denver responsible for cap numbers of $23.65 million and $27.65 million in 2020 and 2021.

Reports have suggested the Bengals could seek a second-round pick in a trade. And while the Bears have two second-rounders, those picks represent their only selections in the top-50. That makes them hard to deal, even for a slight upgrade at the quarterback position.

There is no denying that both Dalton and Mitch Trubisky are coming off down 2019 seasons. And because of that, I understand why there has been push back against the idea of trading for him. But it’s Dalton’s history of relative success and a high floor that makes him enticing as a stop-gap bridge guy in a season in which the Bears are looking to push Trubisky and make the most out of what they believe is still a window of contention.

In addition to a prior player-coach relationship with new Bears OC Bill Lazor, Dalton’s track record as a starter provides a baseline of respectable, competent play and paints him as a suitable trade target for Chicago. Dalton’s arm helped lead the Bengals to the postseason in each of his first five seasons in the league. Or to put it another way, four more times than the Bears have made the playoffs in the same period of time. In fact, the Dalton-led Bengals have seen the playoffs as many times since 2011 as the Bears have since 1995. Gosh, that pained me to research and type out.

Dalton is by no means a perfect solution to the Bears’ quarterback issues. But there is a sincere case to be made that he could upgrade the quarterbacks room. And if that comes with lifting the offense from the the bottom of league rankings to competency, I can’t argue against exploring a deal that could team a top-10 defense with an offense that can actually hang around, sustain drives, and put points on the scoreboard.