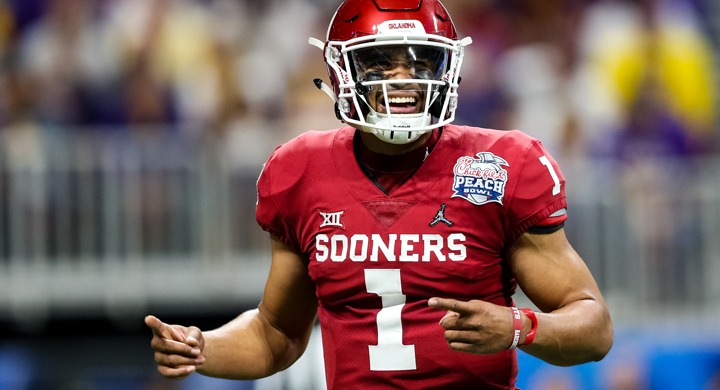 The Bears are expected to take a swing this offseason – be it via free agency or trade – on a veteran quarterback. They’re reportedly looking to add someone who could either push or even supplant incumbent starter Mitch Trubisky, as he enters the fourth year of his rookie contract.

HOWEVER, one NFL Draft pundit believes Chicago won’t stop there.

In his latest mock draft, his first since the completion of the NFL Scouting Combine in Indianapolis, Bleacher Report’s Matt Miller sends Oklahoma quarterback Jalen Hurts to the Bears with the 50th overall selection. That would be the second of Chicago’s two picks, with the first being used on Notre Dame tight end Cole Kmet. But it’s the Hurts picks that catches my eye. And to be honest, it might be because I have developed a pre-draft prospect crush on Hurts.

All aboard the Jalen Hurts Hype Express!

Hurts checks an awful lotta boxes for a quarterback prospect. He aced Steve Mariucci’s whiteboard test, looked good in throwing drills, and tested well athletically with the second best 40-yard dash time (4.59 seconds), tying for the best broad jump (125 inches) among quarterbacks. Oh yeah, and he was an accomplished college quarterback at two prestigious football powerhouses, wrapping up his college career as a Heisman Trophy finalist.

To be clear, Hurts isn’t a perfect prospect. But he is one whose star is on the rise again. Bleacher Report’s Mike Tanier noted that Hurts “demonstrated smoother mechanics and the potential to succeed in a conventional offense” while at the Combine. ESPN analyst/retired NFL offensive lineman Damien Woody liked what he saw from Hurts, tweeting: “Jalen Hurts looking damn good out there!” PFF’s Anthony Treash viewed Hurts as one of the risers after QB workouts at the Combine, writing that Hurts successfully showed off his athleticism and “made NFL teams feel more comfortable with the thought of investing in him.”

Previously, Hurts had been pegged as a possible Day 3 selection. But between his college production, athletic testing, and whiteboard excellence, Hurts is back in the conversation as a possible second-round pick. That should be enough to capture the Bears’ attention.