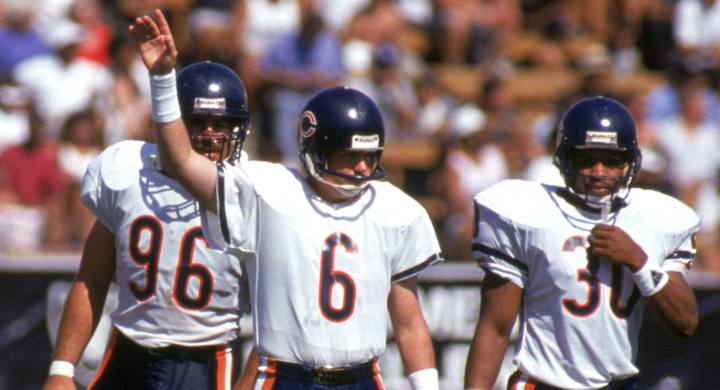 By the end of the 2019 season, the Chicago Bears seemed to be in a good place with kicker Eddy Piñeiro. And yet, we’re expecting the Bears to bring in competition for the kicking job in 2020 — albeit something less … intense than the circus-type atmosphere last year’s obsessive kicker watch produced.

With that in mind, I found it noteworthy to learn that Rodrigo Blankenship, arguably the NFL Draft’s top kicking prospect, found success working with the Bears’ second all-time leading scorer during his college days.

Larry Mayer of the Bears’ official website caught up with Blankenship at the NFL Scouting Combine in Indianapolis, where Blankenship discussed his time at Georgia learning from Kevin Butler. Yes, that’s the same Kevin Butler who passed Walter Payton as the Bears’ all-time leading scorer while kicking in Chicago, who also ultimately lapped by some dude named Robbie Gould (you might’ve heard of some of these guys).

Butler serves as a special teams assistant coach at Georgia, where Blankenship kicked his way to the Lou Groza Award (given to college football’s best kicker) and first-team All-SEC honors. For Blankenship, the time spent with Butler helped his game immensely, particularly from a mental perspective.

“(Butler) really gave me a process to go through where after the kick, you come off to the sideline, you kind of just give yourself a minute to evaluate what you did well or what you maybe didn’t do so well, and then just (identify) a correction you could make going forward,” Blankeship said, via the Bears website. “He just gave me a little bit of a process and a checklist that I can go through after a kick just to kind of keep focused and keep trucking forward in the game.”

Bears fans are well aware of the importance of mental fortitude when it comes to the kicking game. And if Butler has been successful in somehow passing that along to Blankenship through what he taught him on campus, then college football’s best kicker in 2019 is going to get his fair share of interest. Remember, Blankenship already met with the Bears at the Senior Bowl. So there is certainly some familiarity there with both sides.

You’re probably asking: “But what about Piñeiro?” And I hear you loud and clear. Piñeiro finished the year having made 82.1 percent of his field goals and 93.1 percent of his extra points. The best runs came (1) at the start of the year as Piñeiro nailed 9 of 10 attempts in his first six games (including that incredible game-winner at Denver) and (2) when he connected on 11 consecutive field goal tries to end the regular season (including a game-winner in the season-finale at Minnesota). Ultimately, it was a good season, but it was still one that left something to be desired.

Because while we have a 12-game sample of superb kicking, that four-game middle was painful. Period. The middle four weeks saw Piñeiro miss four of seven field goals (including what would have been a game-winner against the Chargers) and an extra point. It was an ugly stretch that raised concerns whether he would even make it through his first season with the team. The Bears ultimately showed faith in Piñeiro, who rewarded them with a strong closing argument as to why he should retain the job. Even still … it wasn’t enough to lock him into a roster spot in 2020.

The kicking game wasn’t as problematic for the Bears in 2019 as it was the year before. But “better” doesn’t necessarily mean “good” in the grand scheme of things. Even if it did, there would still be questions if it was “good enough” for a team with Super Bowl aspirations.

Blankenship was a good college kicker. He could be selected late in the upcoming NFL Draft or land as a priority undrafted free agent. I can’t imagine the Bears drafting a kicker, especially when I consider their needs elsewhere at other positions. But because of the possible fit, Blankenship’s collegiate excellence, and a standing relationship with an all-time great Bears kicker, it is worth keeping Blankenship’s name in mind when draft weekend rolls around.