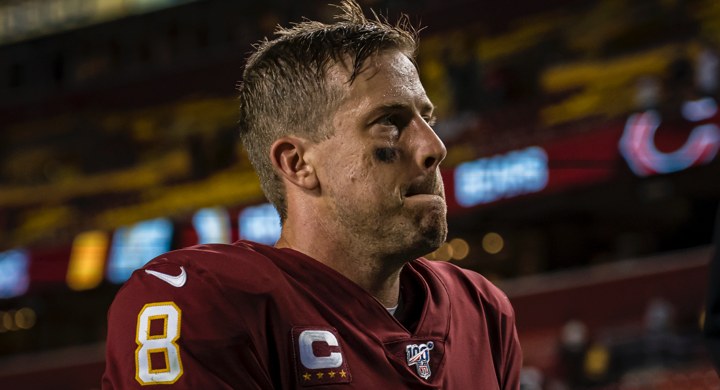 The Chicago Bears are at a crossroads. After delivering a dud in 2019, they must make changes at important positions to get back on the winning track. One way to achieve that goal is through free agency. With that in mind, let’s take a look at some of the more promising and available targets  to see if there’s a fit for the Bears in 2020.

Keenum opened the season as Washington’s starting quarterback because rookie Dwayne Haskins wasn’t where he needed to be in order to be given the keys. But between injuries (he suffered a foot injury playing against the Bears on MNF in Week 3) and regime change (Head Coach Jay Gruden was fired in October), Keenum’s time as starter was limited.

Keenum’s path to this point is one that I’m not sure anyone has traveled, so let’s follow this journey:

Keenum is a journeyman who has shown an impressive amount of resolve to go with a respectable level of competence at the quarterback position. Nothing will match his 2017 season when he completed 67.7 percent of his passes, threw for 3,547 yards, 22 touchdowns, and just 7 interceptions while posting an impressive 98.3 passer rating. But I tip my cap to a guy who took this Vikings core to the NFC title game when Kirk Cousins – when given the same core – has just one playoff win in two years.

Keenum doesn’t crack PFF’s top-100 free agents and isn’t expected to break the bank with his next deal. In fact, a projection from OverTheCap.com envisions his next contract being a one-year pact worth up to $11 million and includes just $6 million guaranteed. That’s a relative buy-low bargain for a veteran starter who is a clear upgrade at the QB2 position.

Keenum gives off high-end QB2 vibes, which will likely make him somewhat of a commodity in the eyes of a contender.

As a career journeyman, Keenum can slide into the QB2 role with ease. And that he could do so while allowing Mitch Trubisky to get a clear shot at earning his starting role in 2020 would likely be a perceived plus from the viewpoint of a front office that hitched its wagons to Trubisky on draft night 2017. The bonus would be that Keenum is a seasoned backup with extensive starting experience. So if Trubisky was unable to keep his grasp on the starting gig, Keenum has ample experience filling in, taking what the defense gives him, and playing the role of bridge quarterback.

There is something about competent play from a reserve that strikes me as important, so whomever the Bears bring in as QB2 needs to be able to provide that upon arrival. All things being equal, Keenum can be that guy. But asking for anything more out of him would be a mistake.