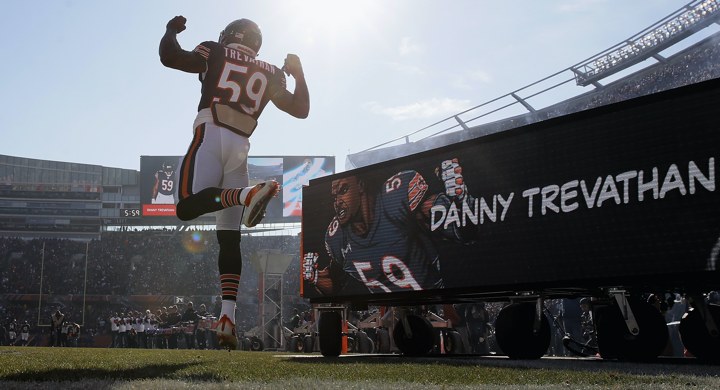 Before being forced out early from the Bears’ Week 9 win (with what turned out to be a season-ending elbow injury), Danny Trevathan was rolling.

The veteran linebacker was playing to a 134-tackle (96 solo!) season, and was in the middle of everything the Bears did on defense. Indeed, there was a time when losing Trevathan for anything more than a game would’ve been considered something close to a doomsday scenario. But then 2019 happened, and the defense was able to hold its own with Nick Kwiatkoski and Kevin Pierre-Louis while Trevathan (and eventually Roquan Smith) were out. That was huge.

Even still … there is something about seeing No. 59 out there in the middle of the Bears defense that is reassuring, to say nothing about the quality of depth lost in his absence (everyone gets bumped up the roster, leaving space behind them).

One could argue that Trevathan’s best years came in Denver, when he was doing work in the middle of a Broncos defense that went to the Super Bowl in 2013 (but lost) and again in 2015 (and won!). In fact, those years in Denver helped propel Trevathan toward the big-money contract the Bears gave him in 2016. HOWEVER, I could make a strong case for Trevathan’s best years coming in Chicago.

Sure, I understand that Trevathan had just one fully healthy season during the duration of his contract. But Trevathan’s time with the Bears is about more than numbers. He helped re-establish a winning culture and atmosphere in Chicago. Put aside whether you liked John Fox or not, his past relationship with Trevathan helped lure him to town, which ultimately kick-started the rebuild of a defense that was one of the all-time worst in franchise history just two years prior to his arrival. Trevathan solidified the middle with sound tackling, infectious energy, and plenty of range when he was on the field. The numbers are what they are, but I refuse to ignore the intangibles that jump off the page.

Trevathan ended the four-year deal he signed with the Bears back in 2016 on injured reserve. It was a contract that included more than $15 million in guarantees with an average annual salary of $7 million. But because Trevathan has just one season in which he played all 16 games during his run in Chicago, it is highly doubtful he will get a similar contract this offseason.

OverTheCap.com doesn’t have a projected contract for Trevathan, but there is one similar player whose estimated offseason contract could be used as a basis to provide a us a baseline for a possible deal. Jamie Collins has a projected two-year deal worth $15 million total that includes just $5.5 million in guarantees. Collins, 30, appeared to recapture the magic in his return to the Patriots, but the tape he put out there while playing for the Browns is hardly inspiring. In the end, a short-term deal that doesn’t saddle the Bears with a ton of guaranteed money is one that could make sense for a team that needs a starting inside linebacker and a player who could use a one-year “prove it” deal to re-establish himself before re-entering free agency a year from now.

Finding the right free agent fit, convincing them to sign with a losing team, and actually getting them to do it (with your team!) is one of the toughest challenges modern general managers face. And not only did Pace (with the help of John Fox) identify and sign Trevathan, he was an important part of a rebuilt defense and division winner. With that being said, Trevathan is still a fit for the Bears moving forward.

Trevathan remains a solid tackler, a crafty defender in the pass game, and an occasional pass-rusher when the moment strikes. There’s something to be said about a player who does a lot of things well, even though he isn’t necessarily elite in any one particular area. And because of that, re-signing Trevathan should be on the to-do list. Now, whether it is remains unknown, but it should be.

Because even as Trevathan enters his age 30 season, he continues to show an ability to get things done on the field — which makes him quite valuable to the Bears.

The issue is that he hasn’t been healthy enough to contribute his type of impact over the course of a full season. And if he isn’t on the playing field, his value just isn’t there. Due to previously mentioned injury concerns, a short-term contract that isn’t restrictive from a cap perspective could be the type of deal that keeps these two together for a fifth year.