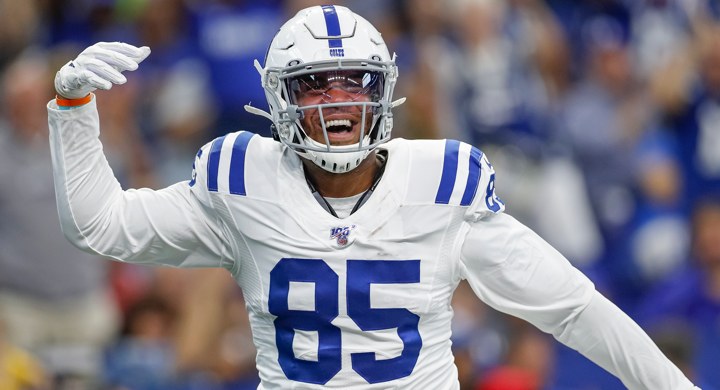 The 2019 season was essentially a lost one for Ebron, who was limited to 11 games due to a season-ending ankle injury. And yet, he ranked 16th among tight ends per PFF’s grading scale. That’s not awful. In fact, that is better than Kyle Rudolph, Greg Olsen, Evan Engram, Jason Witten, Jimmy Graham, and O.J. Howard (among others). Dare I wonder if perhaps Pro Football Focus is onto something here? Hmmm …

Ebron’s best year came in 2018. He earned his first trip to the Pro Bowl by catching 66 passes, gaining 750 receiving yards, and scoring 13 touchdowns. It was the type of breakout the Lions thought would come after drafting him with the 10th overall pick in the 2014 NFL Draft. Except, that magical campaign came while Ebron was a member of the Colts — just one season after leaving the Lions upon the expiration of his rookie deal. That’s so Lions.

Unfortunately, Ebron wasn’t able to stack back-to-back Pro Bowl seasons as he ended the year on injured reserve. Because Ebron has an injury history (hamstring, 2015; knee & ankle, 2016) behind him, there might be concerns about committing to him as a free agent on a lengthy deal.

Ebron is PFF’s 30th overall free agent and second-highest ranked tight end, which puts him ahead of the highly touted Austin Hooper. So, Ebron is set to cash out in a big way … right? Well, not quite.

According to OverTheCap.com’s projected contract is on the more affordable side of the ledger. The forecast calls for a three-year deal worth up to $22.5 million total. It’s a modest $7.5 million in average annual value, and includes $14 million in guarantees. That’s nearly $3 million less per year, $7 million less in guarantees, and about half of Hooper’s projected total deal.

Perhaps Ebron’s hints of wanting to play in Chicago would set up for the Bears to get some kind of discount? I imagine a team with limited cap room would make that type of pitch.

Mitch Trubisky was at his best when throwing to the tight end in 2018, posting a passer rating well north of 100 when targeting Trey Burton in 2018. Burton was hurt and ineffective last season, which was a contributing factor in Trubisky’s slide. That’s where Ebron could come in handy. Ebron has recorded four consecutive seasons with a receiving grade of 69 or better. Not only is that nice, PFF notes “that’s a good résumé” for someone with the ability to work the middle of the field and stretch defenses.

Bears tight ends put up woeful numbers in 2019. That’s why the Bears have been connected to players at the position via mock drafts, rumored trades, and possible free agents. Should the Bears approach free agency with a more conservative mindset when it comes to spending, it is possible Ebron could fit as an upgrade to their receiving targets. Everyone knows the Bears could use one of those to get the offense going in the right direction in 2020.