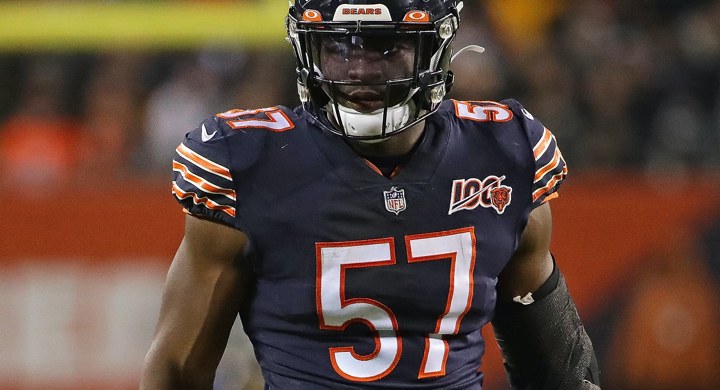 The 2019 Bears had four pretty good inside linebackers. Having that much depth proved to be valuable, as two of those players ended the season on injured reserve.

Three headed toward this offseason as looming free agents, and although the Bears locked up Danny Trevathan, the other two are heading out.

One of the replacement starters, Nick Kwiatkoski, signed a lucrative deal with the Las Vegas Raiders. Kwiatkoski parlayed his time as a reserve and jack-of-many trades into a multi-year gig and a starting role.

The other late-season fill-in will soon have a new football home, too. NFL Network insider Ian Rapoport tweets Washington is signing Kevin Pierre-Louis to fill one of its linebacker spots. The contract is worth a reported $3.45 million for one year, which could put the Bears in line for a compensatory pick in 2021 (Over the Cap is already projecting that it will).

Pierre-Louis was nice to have in a reserve role, especially as he finished the season on a high note. He started the final three games and played a majority of the starter’s snaps over the final four games of the year. In those contests, he collected 28 tackles, two tackles-for-loss, two quarterback hits, and an interception. Impressively enough, Pierre-Louis did it while playing more than half of the Bears’ special teams snaps down the stretch. (Nobody remembers those brutal penalties, right?)

Even as the Bears have retained Trevathan to maintain continuity among the inside linebackers and signed Robert Quinn to bolster the pass-rush, Chicago’s defensive depth has taken a hit the last few days. Pierre-Louis joins Kwiatkoski and defensive lineman Nick Williams as former Bears backups who are cashing in elsewhere. For his struggles in building competitive depth elsewhere, GM Ryan Pace did a magnificent job in creating a deep and talented defensive unit. That will need to continue if this group is to maintain the excellent standard it has set over the last two seasons.