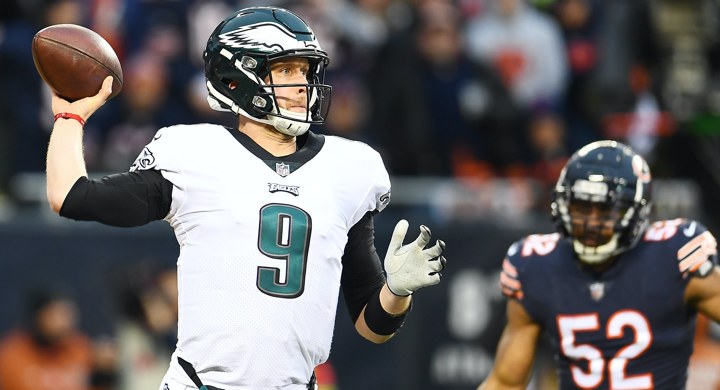 The Chicago Bears have a new quarterback in the room.

He is a Pro Bowler and a Super Bowl champion. He has a playoff victory under his belt at Soldier Field. He’s familiar with the team’s head coach, offensive coordinator, and position coach. And this one time, he even caught a touchdown pass from the guy who is currently slotted in the Bears’ TE1 spot.

Nick Foles is here to compete with Mitch Trubisky. Winner earns the right to steward a team that needs its offense to sustain drives and score points to maximize what projects – once again – to be a fearsome defense.

Let’s get to know the new guy.

Foles certainly checks the boxes of what teams traditionally look for in size when it comes to the quarterback spot.

Foles’ playoff magic was something to behold in 2017. That year, he completed 72.6 percent of his passes, averaged 323.7 yards per game, and threw six touchdowns against just one interception (facing top-notch playoff competition, might I add). Extrapolate those numbers over a 16-game schedule (32 TD, 5 INT, 5,178 passing yards) and they’re flat-out bonkers. Aren’t small samples fun?

And then there’s Foles’ breakout 2013 season, which was nothing short of magical: Throwing 27 touchdowns with an 8.5 TD% is nice, but limiting the turnovers to just two interceptions (a minuscule 0.6 INT%) is the stuff offensive coaches dream of when they put their head on a pillow at night.

However, the seasons in which Foles wasn’t in a quarterback-friendly system weren’t too kind to him. Upon arrival to St. Louis, Foles’ TD% dipped from 6.4 percent to 2.1 percent. And his INT% bumped up from 1.9 percent to 3 percent with the Rams. That’s less than ideal. And in his four games with the Jaguars, Foles’ numbers were merely pedestrian.

Where’s Corey Clement When You Need Him?

That’s Certainly One Way to Spin It

I don’t want to go overboard with this theory, but I think it’s at least worth mentioning: With the possibility of no offseason practices whatsoever, the Bears may have been wise to target a quarterback that already knows the system well – especially since he’s not necessarily the “quarterback of the future.” As an interim steward who could help lead this team to the postseason (either as the starting QB, himself, or as someone that forces Mitch Trubisky to be better), Foles can be a fine pick as a bridge to the next long-term option given the extraordinarily unique circumstances, even if he wasn’t any of our first choice.

Foles proved to be a capable backup quarterback who can lead an offense through challenging times while the starter was out with an injury. It came in an offense loaded with talent, quality offensive line play, and a system that worked, because it attacked with balance. Perhaps knowing the system and the guys who put it in place will ultimately prove to be worthwhile for Foles when he arrives.

Winning a quarterback battle, however, is something different.

Trading for Foles wasn’t the ideal situation. But it provides an upgrade to the QB2 spot while also creating an opportunity to become QB1 if Trubisky doesn’t shape up and get right. Ultimately, acquiring Foles is the first brick toward building a bridge to the next Bears quarterback. When, where, and how Chicago acquires *THAT GUY* remains to be seen.

“This is Not a Rebuild:” Bulls GM Marc Eversley Sounds Confident About the Team’s Future