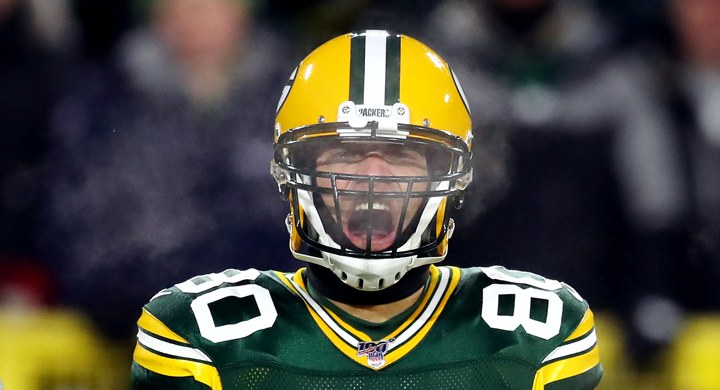 Shortly after the Chicago Bears signed Demetrius Harris, I shared my belief that the team wasn’t done shopping for help in the tight end market.

The Bears still had a need for someone who could slide into Matt Nagy’s offense and play the “U” position or even catch passes while dabbling as the “Y” when put into a formation with Trey Burton. Free agency was ahead of us. As was the NFL Draft. Intriguing options were available in both areas where Chicago was assumed to be aggressive.

At no time did I expect Jimmy Graham to be *THAT* guy, but here we are with news that the Bears and Graham have agreed to a two-year contract.

The overhaul of one of the most important position rooms at Halas Hall continues. So let’s get acquainted to know a guy Bears GM Ryan Pace is familiar with from their time with the New Orleans Saints.

When you think about the trend of football teams taking ex-basketball players and turning them into tight ends, Graham is likely one of the first guys who comes to mind. Graham followed a four-year college basketball career with one year of football at Miami and was then drafted by the Saints in the third-round of the 2010 NFL Draft. New Orleans took a player with quick-twitch athleticism and a basketball body and transformed him into a football freak of nature.

Sure, Graham spent his career catching passes from Drew Brees, Russell Wilson, and Aaron Rodgers. But at the peak of his powers, Graham was one of football’s best players. Not just tight ends. All-around players.

Graham was a matchup nightmare. He was too big to be covered by corners. Too quick to be defended by linebackers. Even safeties had issues slowing down the one-two punch of power and speed Graham threw at defenses. Graham stretched the field with speed that most tight ends generally do not possess. And in the red zone, he towered over defenders to snag all sorts of jump balls. There was a time Graham was the prototype tight end that teams wanted to find. Now the Bears have one, albeit in the latter moments of his career. Could this be a better late than never situation? We’ll see.

Aaron Rodgers to Jimmy Graham was a beaut

“Perhaps it’s high time the kibosh on the perception that Jimmy Graham can not or does not block. That is a misperception,” says Packers analyst Larry McCarren while highlighting a series of blocks. “Would Jimmy Graham rather catch touchdown passes? Absolutely. But in the meantime, is he a willing and effective blocker? Absolutely, again.”

This isn’t encouraging. Thanks for nothing, Matthew.

I struggled to see Graham as a fit when news first surfaced that the Packers were going to release him ahead of free agency, going as far to write: “Despite prior accolades accomplished with the Saints and Seahawks, he looks to be a player on the decline. Graham, 33, hasn’t played with the explosiveness he did while he was racking up three Pro Bowl appearances in a five year stretch with New Orleans. Nor was he the type of impact player in the red zone like he was when he was a two-tie Pro Bowler with 16 touchdowns in his final 32 games in Seattle.” And after passing on Greg Olsen – a veteran tight end who’s been slowed by injuries in recent years who was just waiting for the Bears to hit up his line – I didn’t think the Bears would be in the market for Graham. I was wrong.

So where do the Bears see a fit?

Pace likely sees a player he is familiar with and envisions Graham as a bounce-back candidate after two sub-par seasons in Green Bay. For what it’s worth, Graham’s addition isn’t without value, as the Bears bolster their tight ends room with a signing that doesn’t count against the compensatory draft pick formula for 2021. And I suppose there is value in having a player who knows where to line up and how to play the position. It’s just a matter of how well he can play it while with the Bears.

If a player struggles to find a rhythm with Aaron Rodgers, it is tough to imagine him doing so with whomever the Bears start at QB1 in Week 1 of the 2020 NFL season. But I guess that’s why they play the games on the field and not on paper.