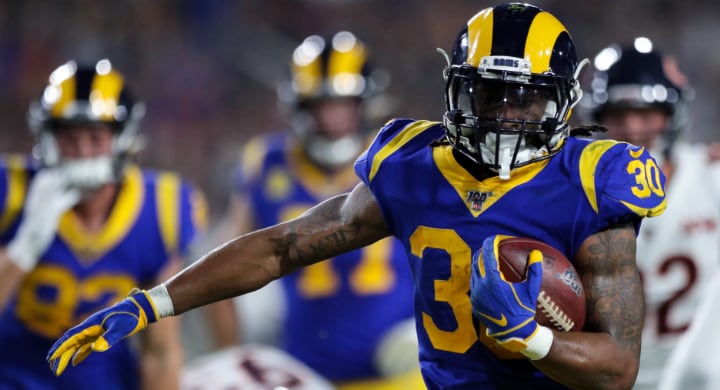 It is a hard-knock life for NFL running backs.

One day, you’re the offense’s workhorse and everybody’s favorite fantasy draft pick. The next day, you’re on the street.

This has been the reality for many backs over the years, with Todd Gurley of the Los Angeles Rams being the latest:

We have released Todd Gurley.

As recently as 2018, Gurley was a star of stars in the league, rushing for at least 1,100 yards in three of his first four seasons, scoring 10+ touchdowns in four of his five professional campaigns, while earning three trips to the Pro Bowl, and two first-team All-Pro nods. Some might think of Gurley as the star of their fantasy football team, and indeed the Georgia product was what made the Rams’ offense go. Jared Goff and the passing game benefitted from Gurley’s excellence on the ground. But now, his time with the Rams is done.

The move to cut ties with Gurley is part cap-related and part the result of a decline in production. ESPN’s Adam Schefter tweets that releasing Gurley keeps the Rams from paying an additional $10.5 million that was due to him today. But the move isn’t totally cap friendly. Using OverTheCap.com’s calculator, releasing Gurley comes with a loss of $2.9 million against the salary cap that puts them at an estimated $5,996,668 under the cap. It’s never good when you have to cut a guy and take that type of hit. Unfortunately, Gurley’s on-field stats pushed this move to the forefront.

Last season, Gurley averaged only 3.8 yards per carry and just 57.1 rushing yards per game. The touchdown production was still on the high end of the spectrum, as Gurley found paydirt 14 times in 2019. But For him to be limited to 1,000 total scrimmage yards when he had been averaging 1,774 scrimmage yards per season from 2015-18 suggests a large drop-off.

When a player with Gurley’s pedigree and potential hits the market, the first thing I think of is potential Bears ramifications. Admittedly, there are other priorities at cornerback, right guard, and wide receiver that come to mind before addressing the running back position. But Gurley has been so good in the past, still has a nose for the end zone, and is still just 25 years old. All that shifts the line of thinking when it comes to him as an addition. There is no denying the Bears could use another running back in the rotation. Adding Gurley to the mix could make for a dynamic tandem with David Montgomery, which could also slide Tarik Cohen into a different role as a gadget player who shifts between backfield work and time in the slot (or even outside) as wide receiver.

But because Gurley will play the 2020 year at his age 26 season, he could still conceivably demand a hefty deal (although note: the Rams reportedly “spent weeks” trying to trade him to no avail, so …). But if he could command an even modestly large deal, it would likely take him completely off the Bears’ radars. However, because Gurley would represent an upgrade to an offense that needs them across the board, it could be something Chicago’s front office kicks the tires on if thinking decides to outside-of-the-box.