The Patriots are Cutting Kicker Stephen Gostkowski … Anybody Biting? Skip to content 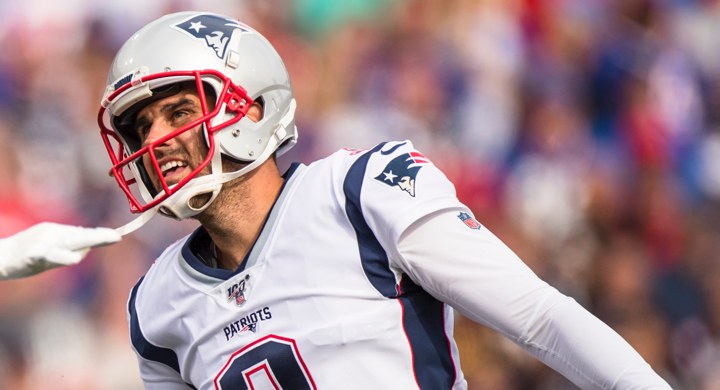 This time, it’s the place-kicker who iced many a Tom Brady drive with clutch field goals and extra points.

Jim McBride of the Boston Globe reports the Patriots are cutting ties with kicker Stephen Gostkowski, who leaves the team as its all-time leading scorer.

At the peak of his powers, Gostkowski was one of football’s most reliable kickers, earning four Pro Bowl trips and two-time first-team All-Pro honors. He connected on 87.4 percent of his field goals with the Patriots during the regular season and 88.6 percent of his tries in the playoffs. Impressive as that is, I have even more respect for Gostkowski, because he did it on the heels of Adam Vinatieri’s stellar career with the Pats. Being the man replacing The Man isn’t easy. And yet, the transition from Vinatieri to Gostkowski was smooth.

So … does anyone you know need a kicker?

Before you put the Bears in the conversation, there is plenty to consider.

For starters, Gostkowski, 36, is coming off an injury shortened year that limited him to just four games and forced the Patriots to sign the likes of Nick Folk, Mike Nugent, and Kai Forbath to replace the sidelined kicker. On top of that, Gostkowski was coming off a 2018 season in which he made 84.4 percent of his kicks. In fact, Gostkowski’s success rate on field goals has been below 88 percent in three of the last four seasons (it was above 91.7% from 2013-2015). That’s a troubling sign for someone at his age, no doubt.

But of course, Gostkowski isn’t the only consideration. There’s also Eddy Piñeiro, who started the season kicking well and finished on a high note. Of course, that ugly middle section of his 2019 campaign in Chicago was too ugly to completely throw out the window. To be clear, there is plenty to like about Piñeiro’s upside as a young kicker in the early stages of his career. Even still … he expects competition when training camp rolls around. And for what it’s worth, the Bears have already met Rodrigo Blankenship, the 2020 NFL Draft’s top kicking prospect — who has unique ties to an all-time great Bears kicker.

At face value, I’m interested in Gostkowski as someone who could possibly come in and kick his way into a job. After all, Bears fans are all-too-familiar with the concept of a team letting go of its all-time leading scorer after and injury fueled rough patch, only to watch them fix their warts and star elsewhere. However, I’m not running to the front of the line to lobby for the Bears to sign him now that he’s hit the free agent market. And because the Patriots have a knack for cutting guys right before their decline hits, I would definitely be wary of making a push for Gostkowski.

Sigh … remember when finding a place-kicker was the Bears’ primary offseason concern? Those were some fun times.