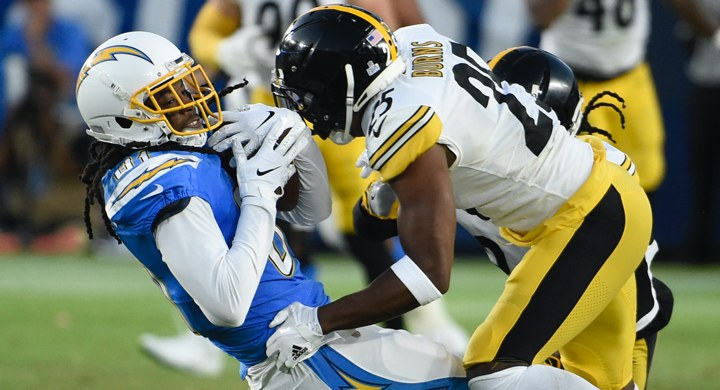 The Bears have done surprisingly well finding quality secondary talent during the Ryan Pace era, in part because of how the front office has attacked the position in different ways.

Eddie Jackson and Adrian Amos were exceptional late-round draft picks who turned out to be immediate starters in their respective draft class. Bryce Callahan and Cre’Von LeBlanc contributed out of the slot as undrafted free agents. Tracy Porter, Prince Amukamara, and Ha Ha Clinton-Dix were thirsty free agent bargains.

Now, the Bears are trying their hand at a fixer-upper whose athleticism, ball-skills, size, and speed helped make him a first-round pick in 2016.

Artie Burns’ stay in Pittsburgh started strong and fizzled out rather quickly, but his falling out of favor with the Steelers could turn into a tremendous opportunity for the Bears.

Burns’ best two seasons in the league were his first two out of the gate. After opening his rookie season as a reserve, Burns was moved into the starting lineup midway through the season, then made the most of his increased playing time. Burns finished with nine starts, three interceptions, and 13 passes defended. Good numbers from the rookie.

A year later, Burns was a full-time starter. He came up with just one interception, but still contributed 13 pass breakups and collected two recovered fumbles.

Things took a turn for the worse for Burns in his final two years in Pittsburgh. He started just seven games, appeared in only 26 contests, and saw his playing time cut drastically in the process. With the trends being what they were and Burns struggles in coverage, the Steelers did not pick up the fifth-year option on the University of Miami product’s rookie deal. And that is how a first-round pick in the 2016 NFL Draft ended up on the Bears on a one-year “prove it” deal.

This Artie Burns meltdown had everything.

An Incredible Journey to the Pros

Signing Burns doesn’t mean you should immediately place his name into the starting lineup across from Kyle Fuller. Instead, Burns is something of a one-year flier for the Bears’ front office. More importantly, he is something of a reclamation project for Defensive Coordinator Chuck Pagano, who has long been known as an excellent secondary coach.

A common criticism of the Steelers when they drafted Burns is that they drafted potential rather than what they saw on tape. Betting on potential while hoping that NFL-caliber coaching gets the most out of a first-round talent is a roll of the dice Bears fans are well aware of. And while that didn’t work out as well as the Steelers would’ve hoped, it’s now on the Bears’ coaches to do what the ones in Pittsburgh couldn’t. And with Pagano leading the way, it is fair to have some hope that Burns’ time in Chicago will be different than his experience in the Steel City.