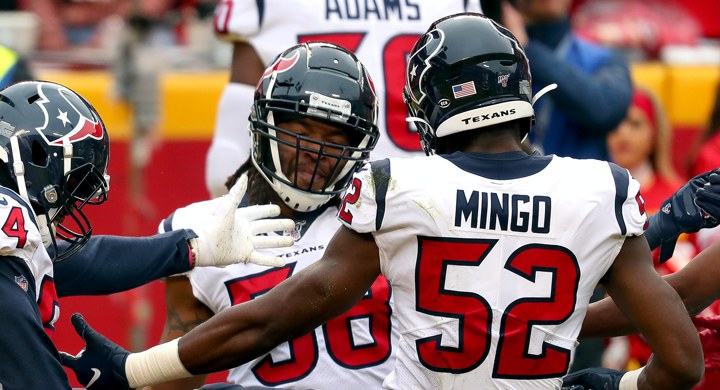 I’m not one to stop people from dreaming big.

So if that’s what you want to do when thinking about Barkevious Mingo, then go ahead. I’ll even provide the link to his pre-draft profile from NFL.com. Seven years later, it’s still pretty drool worthy!

“Tall, long and explosive pass rusher who projects best as a stand-up, weakside edge rusher in the NFL. Incredible first step off the snap, can turn the corner on the outside and shimmy inside against leaning tackles.”

“[H]as surprising strength to go along with the elite length and straight-line speed to rack up double-digit sack numbers and track down ball carriers  as a 3-4 rush linebacker at the next level.”

“Strong player setting the edge against the run. … Overall agility and length make him effective in coverage, can stay with running backs out of the backfield and wrap up receivers in space. Excellent straight-line speed shows when chasing down plays from behind.”

“[F]lashed the talent and projectable skills to be a dominant NFL pass rusher, and a position switch will likely serve him well.”

This is a prospect teams were (rightfully) willing to jump through hoops for back in 2013. No, Mingo didn’t pan out as expected. But he has carved out a role as a steady NFL contributor anyway, saying a lot about his resolve, work ethic, and ability. So let’s take a moment to get to know one of the newest Chicago Bears.

From his NFL.com draft profile in 2013: “Mingo’s long, lean frame sticks out to fans and scouts alike, almost as much as his unusual name.”

Mingo didn’t live up to the billing of being a top-10 pick while in Cleveland. And since leaving the Browns, his play hasn’t merited garnering more than a small share of defensive snaps. Mingo has never played more than a 60 percent snap share on defense in his career, and has been above 50 percent once in the last five years.

However, that hasn’t stopped him from hanging around, mostly as an excellent special teams player and part-time pass-rusher. That might not seem like much, but Bears fans should know how important good special teams play can be to a championship-caliber club.

If You Blinked, You Might’ve Missed This

Barkevious Mingo (@keke_mingo) blocked the punt. Lonnie Johnson (@Lonnie30johnson) runs it in for the touchdown. #Texans up 14-0. pic.twitter.com/TOt8PaJK7w

The #Bears played Barkevious Mingo in 2018 when he was with the Seahawks. He lined up in several different spots in that Week 2 game against Chicago. Here he is lined up as a stand-up edge rusher outside of the left tackle. pic.twitter.com/zbNyW6r26j

I love how athletic Barkevious Mingo is at LB…. Shuts down the QB run element and then helps finish the tackle with Shaquill Griffin. #Seahawks #SEAvsCHIpic.twitter.com/WNr9SNRlDx

Signing Barkevious Mingo is more about what he can do now than what he didn’t do as a highly touted prospect coming out of LSU. Keep that in mind when evaluating the signing.

Right now, Mingo is positioned to take a fair chunk of the 500+ snaps left behind by the departures of core special teams players Nick Kwiatkoski and Kevin Pierre-Louis. Mingo also figures to be first in line to take over the top reserve edge rusher role that belonged to Aaron Lynch the last two years. These aren’t the sexiest jobs on an NFL roster, but the Bears are doing well by filling them with a talented athlete who has a first-round pedigree.