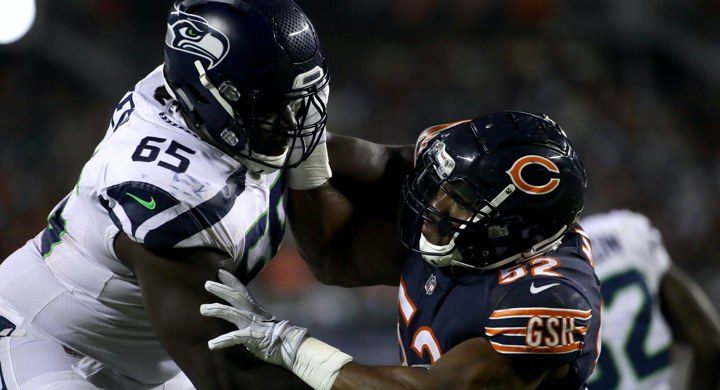 When perusing a list of the Chicago Bears’ needs, I often stop in my tracks when coming across the offensive line.

After all, the line stunk last year, and there’s no denying that fact. However, that group is just one season removed from being recognized among the top half in the league and even entered the 2019 season ranked as one of the top-10 units. So while I understand the urge (among a segment of fans) to burn it down and start from scratch, it simply isn’t plausible and not strategically sound.

They do still need to find a starting right guard to replace Kyle Long, however. So with that in mind, let’s get to know Germain Ifedi, the newest Bears offensive lineman, who could conceivably be that guy if a number of things break in his favor.

Ifedi has been a full-time starter for the better part of the last four years. He cut his teeth as a starting lineman midway through the 2016 season and has played on at least 93 percent of his team’s offensive snaps in the three years since. Durability is the thing that stands out the most about Ifedi, who’s missed just one game since becoming a full-time starter.

Unfortunately, the other thing that stands out to me are a whopping 39 penalties he has committed over the last three years. That’s … a lot.

“He was announced as a tackle, but some people like him inside at guard. He’s massive and powerful, but I question his technique. He’s a bit of a waist-bender. Whether he plays tackle or guard, he will be coached by one of the best in the business in Tom Cable. This is a really good pick for a team that needs offensive linemen.” — Mike Mayock, then as the top draft guru at NFL Network when Ifedi was drafted in 2016.

It doesn’t take much imagination to see where Ifedi fits on the 2020 Bears.

At minimum, Ifedi replaces Cornelius Lucas as the team’s swing tackle. That might not seem like much, but remember what Lucas was able to do in a pinch while Bobby Massie was out of the lineup. Having a solid backup who could be in play is highly valuable. It just so happens that this backup comes with the pedigree of being a first-round draft pick who was a freshman All-American at Texas A&M.

Depending what the Bears do in the upcoming NFL Draft, Ifedi could play his way into a starting role as the team’s right guard. Chicago hasn’t done anything to address that hole in the starting lineup. And while we can (rightfully) obsess about what is happening at quarterback, it won’t matter who is under center if the offense isn’t stabilized at the line of scrimmage. Ifedi wasn’t a great tackle by any stretch, but football history is littered with players who start their career outside, get put inside the box at guard, and improve as players. Maybe that’s where Ifedi ultimately fits.