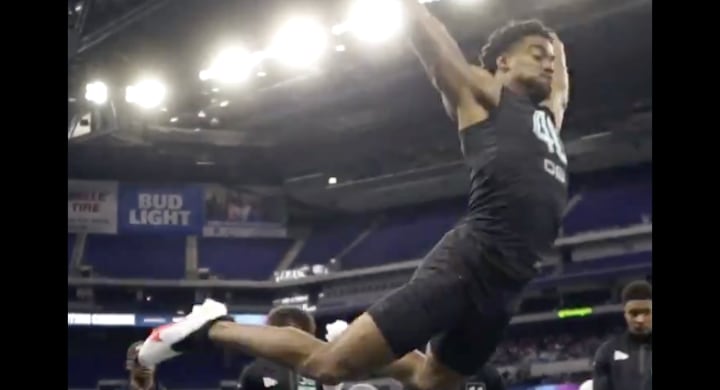 Scouting in the time of COVID-19 is one of the unique challenges each team is facing as the NFL Draft approaches. And with official player visits and pro days off the calendar entirely, the hurdles are even higher for front offices. But technology can be a wonderful thing when used properly, and video interviews have replaced the in-person face-to-face meetings that would normally be taking place at this time.

The Chicago Bears conducted one such meeting with Southern Illinois safety Jeremy Chinn, per Bear Report’s prospect visit tracker. It was Chinn’s second meeting with the Bears, the first coming at the Senior Bowl. A second interview with Chinn immediately piqued my interest, and not just because (full disclosure) he played ball at my alma mater. Chinn’s stock has been on the rise since Senior Bowl Director Jim Nagy had eyes on him at the beginning of the college football season. And because the hype hasn’t subsided, Chinn can find his name in the second round of any number of mock drafts these days.

Beyond that, the dude sounds like he would absolutely cherish the chance to play along Eddie Jackson, Khalil Mack, and the rest of the ferocious Bears defense:

Yesterday, former SIU safety Jeremy Chinn did a Q&A on Reddit. One person asked Chinn how would he feel about being drafted to the Bears in the second round? Here is his response. pic.twitter.com/0wx5UIxnRM

Hey, there is no denying Chinn has good taste in players to study and defenses he would want to be a part of when he makes the jump to the league. Surely, that could help in the interview process. But let’s not overlook Chinn as a prospect.

The dude nailed the Scouting Combine:

Jeremy Chinn (Southern Illinois) & Kyle Dugger (Lenoir-Rhyne) finished the night with the top Athleticism Scores among 2020 safeties based on their combine workout.

Chinn & Dugger are the only non-FBS safeties since 2003 to finish with a max 99 Athleticism Score. pic.twitter.com/LlHqiEK97R

Before that, Chinn drew rave reviews at the Senior Bowl:

The Senior Bowl stage was never going to be too big for Fisher native Jeremy Chinn and he took full advantage of the opportunity. https://t.co/ZBkt4eIrVG

With the 2020 Senior Bowl week starting to wind down I think the storyline I will most remember from this year is the small school prospects showing out.

Chinn has also drawn praise from some of the NFL Draft’s top insiders:

And had a stellar finish to his college career:

All that is to say that Chinn isn’t a fast-rising late bloomer on the draft scene. And because Bears GM Ryan Pace has had success drafting safeties outside of the first round and has shown an affinity toward athletic standouts from non-traditional schools, Chinn was bound to end up on our radar no matter where he went to school.