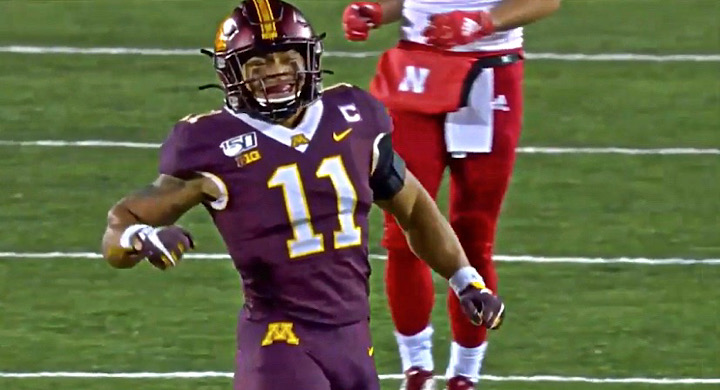 Official meetings between NFL teams and draft prospects are going to be done differently in 2020 because of how the league and its teams are handling COVID-19. But one thing that remains unchanged is that these visits could provide a window into what positions and types of players teams are looking for when April’s draft rolls around.

So I find it interesting that the Chicago Bears have used two of their 30 visits on a pair of the top safeties in this upcoming class. The latest visit is a name Bears fans of a certain age will be familiar with:

SB Nation and Draft Wire analyst Justin Melo tweets the Bears are among the teams who have had pre-draft FaceTime meetings with Antoine Winfield Jr., a talented safety who played his college ball at the University of Minnesota.

Winfield is the son of 14-year NFL veteran Antoine Winfield, who played with the Buffalo Bills and Minnesota Vikings from 1999 to 2012. The elder Winfield was a first-round pick (23rd overall) in the 1999 NFL Draft coming out of Ohio State and had a solid nine-year career in Buffalo before taking his talents to Minnesota. Winfield thrived with the Vikings, making three consecutive Pro Bowl trips in 2008, 2009, and 2010. Now, it is Winfield Jr. blazing a path to the pros.

Teams around the league will surely be intrigued by a prospect with NFL bloodlines and a Big Ten pedigree. Winfield Jr. was a stud for the Golden Gophers football team, earning unanimous first-team All-American honors and first-team Big Ten recognition, as well as the conferences’s Defensive Back of the Year award.

Check out these moves:

Pinning down where Winfield Jr. could go in the upcoming draft is somewhat of a challenge. Winfield Jr.’s  size (5-9, 203 pounds) and injury history (foot and hamstring injuries) could be used as reasons he drops to the second round. But Todd McShay’s most recent mock draft at ESPN has Winfield Jr. going in Round 1 to the Las Vegas Raiders (ironically, with the pick that was sent to them by the Bears in the Khalil Mack trade).

Size and injury history being what it is, Winfield Jr. is one of the most intriguing secondary prospects in this draft. Because in addition to having NFL bloodlines and experience against the Big Ten’s best, Winfield Jr. showed knack for making big plays, impressive ball skills, and an ability (and willingness) to make tackles in the open field. Considering the Bears would like all of those things in a prospect to team with Eddie Jackson at safety, Winfield Jr. should be a prospect of interest as we move toward the NFL Draft.