Bears to Meet with Offensive Lineman Josh Jones, Whose Draft Stock Is on the Rise Skip to content 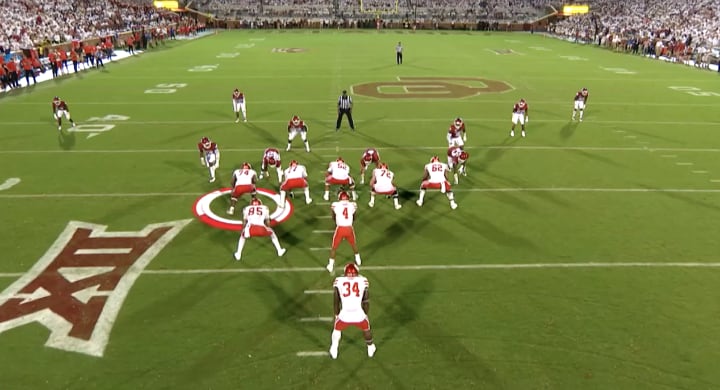 Because the Chicago Bears still have needs along the offensive line – specifically at right guard – I imagine their name will pop up in connection with the draft’s top offensive linemen relatively often.

With that being said, Aaron Wilson of the Houston Chronicle recently reported that the Bears were among the teams scheduling a video meeting with University of Houston offensive tackle Josh Jones, one of the most intriguing offensive line prospects.

Of course, the Bears aren’t alone:

Jones is the fifth-rated draft-eligible offensive lineman at CBS Sports and 32nd overall prospect. At 6-5 and 319 pounds, he certainly has the measurables teams desire out of an offensive line prospect. And since the Bears could use an influx of young talent at the position, Jones should be on their radar.

Jones’ strengths, as listed by Lance Zierlein of NFL.com, are tantalizing. Among them:

This video breakdown is eye-opening:

To be clear, Jones still has some kinks to work out in his game. That makes sense, because he’d be a sure-fire first-round pick if he were more well-rounded. But as Zierlein points out in Jones’ draft profile, “most of Jones’ issues appear to be coachable.” That is certainly encouraging.

And yet, nothing appeals to me more than one of Jones’ strengths being “potentially nasty field demeanor.” There is an edge that is missing to the Bears offense. And while improved play from the quarterback, running back, receiver, and tight end positions all would be welcome in 2020, none of that will be possible without better performances from the offensive line. Adding a little bit of nasty surely wouldn’t hurt the cause.

As for a potential Bears fit, don’t get caught up in Jones being projected to be a tackle when the team already has two high-priced players entrenched at the position to start the 2020 campaign. Considering the work that needs to be done in his game, this isn’t something to be overly concerned should the Bears choose to draft him.

I thought it was a misstep when the Bears used the salary cap (conjured up through creative measures) on positions that weren’t along the offensive line, but still found solace in knowing that the NFL Draft was around the corner.  And if Chicago can use the draft to target and select younger players with more upside (like Jones) whose rookie-scale deals wouldn’t be cap crunchers, they will be better overall in the grand scheme of rebuilding a broken offense.