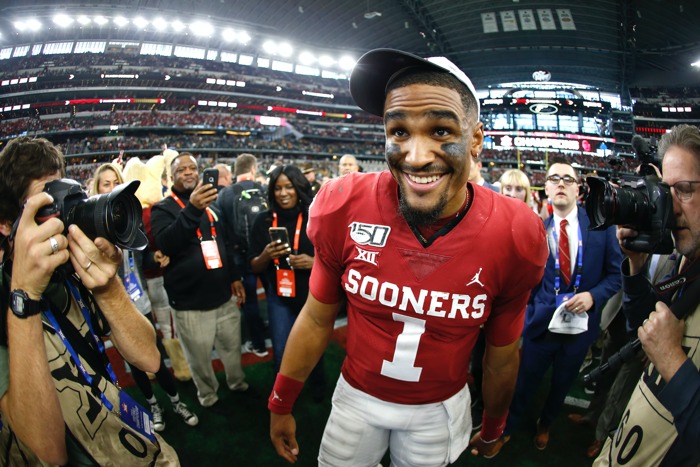 That sound you hear is the Jalen Hurts hype train picking up steam after NFL Network draft guru Daniel Jeremiah bumped the Oklahoma quarterback into his updated list of top-50 draft-eligible prospects.

Jeremiah’s reasoning is as follows:

There is one thing that sticks out to me about Jeremiah’s updated assessment of Hurts, and it’s worth highlighting:

“When I was a young scout, I got some advice from some of the older guys that said ‘one of the most important things in scouting don’t focus on what these guys can’t do, focus on what they can do.”

That is a message that often gets lost when discussing draft prospects and fits, especially this time of year when we’re less than a month away from having the draft. It’s almost as if there is an uneven focus on what a prospect can’t do, while what they can do is dismissed. So let’s discuss that for a moment.

In addition to the athleticism that jumps off the screen when you watch him play, Hurts showed off competitiveness, toughness, leadership skills, and football intelligence for two of the nation’s most prestigious college football powerhouses. The combination of on-field production, playmaking ability, and intangibles is something that should be appealing to teams looking for a quarterback in this draft. (Lookin’ at you, Bears.)

This isn’t to say Hurts isn’t without his flaws. If that were the case, he’d have been in Jeremiah’s top-50 from the get-go. And indeed, even as Jeremiah moved Hurts into his top-50, he cautioned the fast-rising quarterback still has work to do with anticipatory throws and timing. But that he has things to work on shouldn’t take away from the stuff he does well, which is ultimately Jeremiah’s point.

Getting a feel for which quarterbacks are worthy of being top-50 prospects in this draft has been a challenge for a long while. Since starting this exercise back in January, Jeremiah has had seven different quarterbacks in his top-50. Joe Burrow, Tua Tagovailoa, Justin Herbert, and Jordan Love have been entrenched as top prospects throughout this journey. But in the iterations since Jacob Eason and Jake Fromm were included in the original release, both have dropped out of the top-50 — which goes a long way toward explaining why it is so difficult to peg the top quarterback prospects.