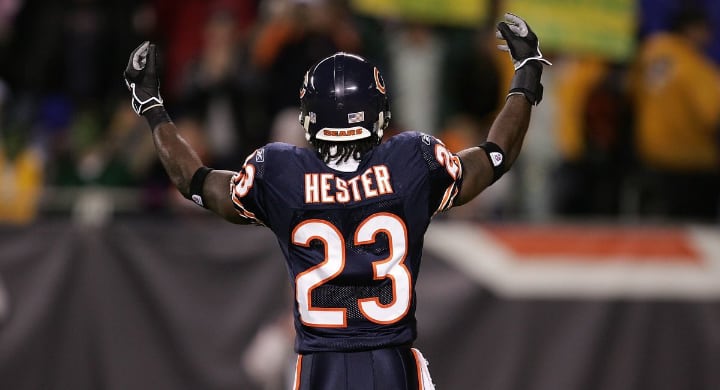 The 2010s weren’t all that great for the Chicago Bears, as they suffered through more losing seasons (4) than playoff appearances (2). But at least they had some fun players to cheer on along the way.

The NFL revealed its All-Decade Team for the 2010s, which features a handful of stars who rocked the navy blue and orange during what was an otherwise forgettable stretch of football. So let’s check them out.

Hester spent the first four years of the decade in Chicago, where he was an excellent kick returner and an aspiring wide receiver. From 2010-13, Hester returned seven kicks (six punts, one kickoff) for touchdowns and racked up 4,812 in return yards — including a league-leading 1,436 kick return yards in 2013. So, yeah, this is a well-deserved honor.

Patterson only spent one year of the last decade with the Bears, but it sure was a doozy. He earned Pro Bowl and first-team All-Pro honors for his work as a returner and as a special teams gunner. Patterson’s kick return touchdown against the Saints was arguably the highlight of the year for the Bears, while his efforts in recruitment of free agents via Twitter has been refreshing to follow throughout the offseason.

Mack was so good in his first year with the Bears, he made the franchise’s All-Century team for his efforts. Pure domination. Mack has been an undeniable force since arriving in Chicago. His presence transformed the Bears defense from good to elite, and he figures to keep Chicago’s defense in tip-top shape for years to come.

Before Mack was terrorizing quarterbacks on a weekly basis, Peppers was wrecking offensive game plans by coming off the edge. Peppers signed with the Bears as a free agent in 2010, then proceeded to make the Pro Bowl in three of the first four years with the team. From 2010-13, Peppers didn’t miss a game as he racked up 37.5 sacks, 52 quarterback hits, 47 tackles-for-loss, 10 forced fumbles, 7 fumble recoveries, 3 interceptions, and one defensive touchdown.

His time in Chicago didn’t last as long as some fans would have wanted, but Peppers’ impact was felt early and often in his four years.

As for the rest of the squad, check it out::