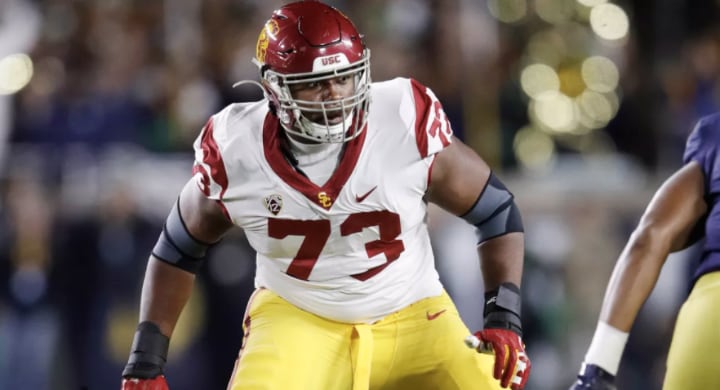 “Jackson has loads of athletic ability and play talent that is waiting to be developed and harvested.”

In case you missed our Josh Jones profile, I’ll repeat what I said about the Bears’ offensive line in 2019:

The Bears’ offensive line was a mess in 2019. A group viewed among the top half of the league in 2018 and projected to be a top-10 unit heading into last season fell apart at every turn. Between injuries, a failed position swap, and regression at both tackles, it felt as if nothing went right for Chicago’s line last year. And because of those events, the Bears should be looking at long-term solutions along the line.

This is where I imagine a prospect like Jackson fits in.

Jackson has size, athleticism, a unique skill set, and projects to be a long-term left tackle solution for a team willing to mold a raw talent. What makes Jackson most intriguing is potential position flexibility. NFL.com draft analyst Lance Zierlein writes that Jackson is “a scheme-diverse” player who could slide inside to guard if he bulks up and builds on his strength. And if that’s how it shakes out, Jackson could start sooner (as an interior linemen) then later (as a tackle) after wetting his feet at guard.

This wouldn’t be the first time it happened with a top-tier tackle prospect. Some people forget Hall of Fame tackle Jonathan Ogden started his professional career as a guard with the Ravens before moving back outside. Considering that the Bears have two starting tackles employed and entrenched, it wouldn’t be the worst thing to snag Jackson with one of the team’s two second-round picks, ease him into the fold (as they did with James Daniels in 2018), then unleash him as a tackle down the line.