Check Out Tua Tagovailoa's Virtual Pro Day Film, Which Was Sent to All 32 NFL Teams (Sup, Bears?) Skip to content 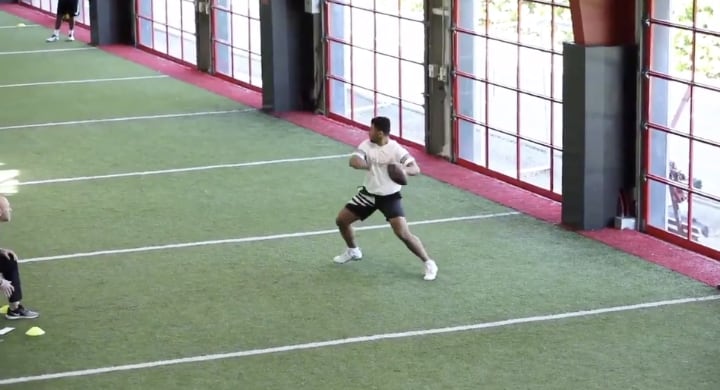 The last time anyone saw Tua Tagovailoa on a football field, he was leaving it after suffering what turned out to be a season-ending hip injury last November.

Five months later, Tagovailoa took to the field again. And, yeah sure, it’s just the practice field, but every great comeback story comes with a humble beginning. Tagovailoa is no different.

On Thursday, #Bama QB Tua Tagovailoa held a virtual Pro Day, with footage sent to all 32 teams. Here are some highlights 👇🏼👇🏼👇🏼 pic.twitter.com/KL9EjYiu5P

But isn’t it nice to have it all in one convenient package?

As for Tagovailoa’s virtual Pro Day, Rapoport tweets that the footage was cut up from an hour-long workout session that took place in front of fewer than 10 people.

Hey, good on Tua and his representatives for following COVID-19 social distancing codes. Way to show some good decision-making and leadership, kid.

As for the workout itself, it featured 55 scripted throws and another 20 throws as part of an unscripted drill. All things considered, Tagovailoa looked good in the workout. Then again, plenty of prospects look good throwing in shorts. Then they put the pads on and things get thrown for a loop. But at least we have seen Tagovailoa thrive when the pads are on and in pressure-packed situations.

As for the full Pro Day footage being sent to all 32 NFL teams — sends suggestive looks in the general direction of the Bears — that’s to be expected. But considering the Bears’ long-term needs at the position, and the fact that they have two quarterbacks in place that would allow Tagovailoa to use his rookie year in the league as a red-shirt season to get fully healthy and learn a professional offense, I can easily put together pieces that would suggest Chicago as an ideal fit for a prospect whose stock could drop due to medical red flags.

Should that play out to the point where Tagovailoa drops to the bottom half of the first round, the Bears would be wise to kick the tires and determine the cost of doing business for a trade up in the draft.

Because while I firmly believe the Bears should use one of their two second-round picks to move down and collect more draft assets, I’m willing to budge a little if a top tier quarterback prospect falls down the draft board.