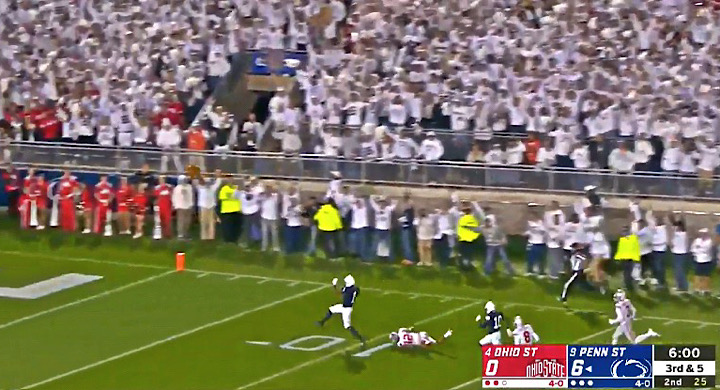 “He’s a smallish slot who isn’t built for the tough yardage and could have durability concerns if he’s run into too many collisions. However, speed kills and his game-breaking potential on all three levels will be enticing as a high-risk, high-reward draft pick.”

Mel Kiper Jr.’s latest mock draft has the Bears taking Hamler with one of their two second-round picks. Back in March, ESPN analyst Matt Bowen tweeted he could see Hamler fitting in Matt Nagy’s offense, but didn’t seem convinced Chicago would take a receiver that early.

The Bears have a need for speed. Particularly on the offensive side of the ball. Specifically at wide receiver.

To be clear, this is no knock on the collection of pass-catchers the Bears have already assembled. Allen Robinson II is a reliable stud (one who is worthy of a hefty extension, might I add). Anthony Miller has a tremendous amount of upside (if he can stay healthy for a full 16-game season). Cordarelle Patterson is a multi-faceted speedster (who could be an impact player if used correctly). Javon Wims and Riley Ridley both have solid route-running skills and an SEC pedigree (but are still making their way up the depth chart). All things considered, the Bears could use a play-making receiver who ties the room together.

Hamler fits the bill as a slot receiver who has enough versatility to play outside and impressive speed to be a down-the-field game-breaker. Lance Zierlein’s NFL.com draft profile highlighted Hamler’s ability to shake press coverage applied by Ohio State cornerback Jeff Okudah, who projects to go third overall in some mocks and is widely regarded as the top cornerback in this class. That’s as good as it gets when it comes to pre-draft praise.

Unfortunately, Hamler’s red flags are bright and plentiful. His size is cause for concern in terms of long-term durability. The nine drops last season are problematic. And his route-running skills leave something to be desired.

And yet, Hamler’s athleticism and tools are so loud, he could ultimately be the type of receiver we look back at and wonder how he made it into the second round in the first place … Or, of course, someone whose issues we look back on and lead to a discussion regarding second-round busts. But that’s the gamble teams take with high-risk, high-reward prospects. Whether it’s one the Bears are willing to take is something we’ll find out soon enough.