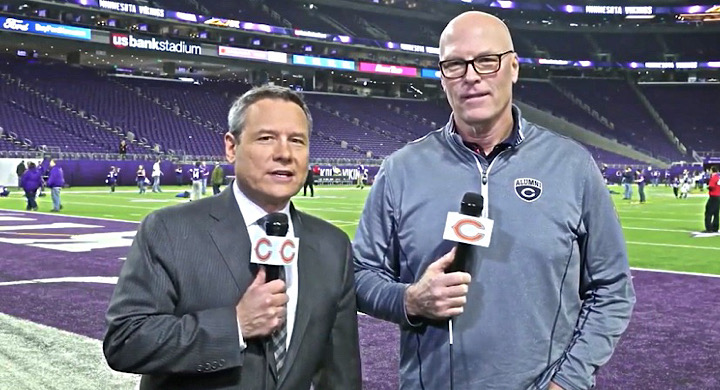 I really hope my television partners, Michael and Danny, are willing to teach a noob how to do a Tik Tok. Otherwise, I’m at the mercy of the public. *GULP*

Got goosebumps while watching this clip. TJ running the rock. We’re blocking our asses off. Run #3 I block the LB then come back down hill and crack the Safety taking out two on the same play. The last play is one of my most memorable plays when T Jones reversed field for the TD. https://t.co/atmUU8wTXS

Love hearing @AllenRobinson critiquing himself in this play. “This is bad technique on my part. … I didn’t close the cushion enough to give him something…” pic.twitter.com/iaY2wIA7eY

Tarik Cohen can play "Call of Duty" and talk to @ChiTribKane at the same time: How Chicago athletes are staying in the game amid coronavirus quarantine and a pro sports shutdown https://t.co/65itJ49vc3

Few bigger non-stories than teams being "in contact" with prospective draft picks. Every year, you talk with draft picks and it's split between those who never were in contact with #Raiders (Khalil Mack for example) and were drafted, and those who were in contact and got drafted.

#Bears GM Ryan Pace will hold a conference call next Tuesday ahead of the 2020 NFL draft.

I want to explain these pictures that have been shared lately from my trip to the White House when I was with the @packers and I wore my @chicagobears jersey. In 86 our trip was cancelled due to the space shuttle Challenger disaster. I cleared it with my teammates at the time. pic.twitter.com/dmgim30S7X

Karnisovas: “No Decision” on Boylen Made Yet, but Evaluation Cominghttps://t.co/0OAof4Dpg0

Commissioners of MLB, NBA, NFL and Other Pro Sports Leaders Are Advising President Trump on Re-Opening the Country https://t.co/gznUPLK4P2 pic.twitter.com/lhvDy0Mwxa

Hey, Yeah … Why Do All Ballparks Look Totally Different?https://t.co/xjfoOzLdFj