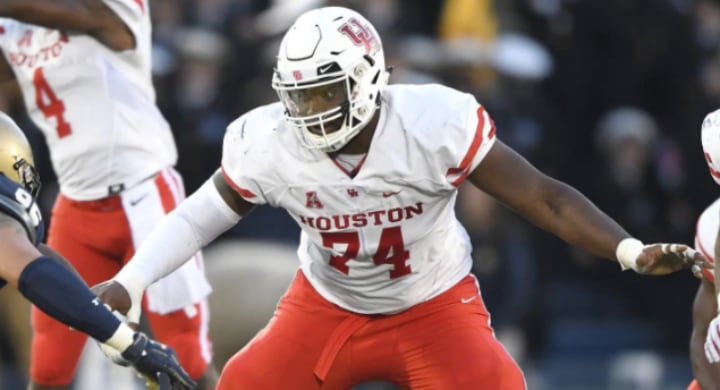 Knowing that the Chicago Bears must still supplement their offensive line before the start of the 2020 regular season, I’ve been spending time thinking about what I want in an offensive linemen. Then it hit me.

Thinking about what I want in an offensive linemen often brings me back to someone like Kyle Long, who always protects his QB (even when he’s on the sideline). pic.twitter.com/FH43u2D5Bv

… and shortly thereafter, a search for solutions to a long-standing Bears problem.

With that in mind, I went digging into Kyle Long’s NFL.com draft profile to unearth what the 2013 first-round pick had going in his favor. Among the highlights:

Those three tidbits stand out most in Long’s profile. And as far as I’m concerned, those are the things the Bears should be looking for in a draft prospect lineman.

So let’s check out who fits the bill …

NFL.com draft analyst Lance Zierlein lists “long frame has room for additional mass” and “hints at a potentially nasty field demeanor” as Jones’ strengths, which plays right into two of the three most desirable traits Long had. The profile goes onto highlight Jones’ “lateral-slide smoothness,”  ability to block linebackers at the second level, and quickness when asked to pull. It all reads awfully similar to Long’s profile.

When trying to unearth the next Long, it was easy to keep coming back to Jones’ profile and draw the similarities.

Ruiz’s profile is another one that circles the prospect’s ability to block on the move, with Zierlein writing that the Michigan product is “fluid on the go and can lead the charge on wide pulls and screens.” The Bears could stand to add a lineman who could help open up the screen game for Tarik Cohen, David Montgomery, Cordarrelle Patterson, and a host of others.

That Ruiz has “early starting potential” and positional flexibility is great, but playing with “tenacious demeanor from whistle to whistle” is something that sticks out if the Bears were truly looking to capture the spirit of what Long brought to the table in finding his replacement.

If Hunt’s alma mater rings a bell, it might be because that is the same school that produced Charles “Peanut” Tillman. The Bears used a second-round pick on Tillman, who changed how the corner position was played with how he created turnovers. Could they go to the well again with Hunt? Perhaps it would make sense.

Like Long, Hunt projects to have multi-position flexibility having shown an ability to play guard and tackle. In Hunt’s draft profile, Zierlein points out the prospect’s mobility by highlighting his work toward sustaining blocks on the second level and beyond. And I simply can’t ignore the line about how Hunt “looks to make a point with aggressive first contact.”

Only once in the last eight years has Chicago used its first draft choice on an offensive lineman. Granted, it was a good one as we watched Long make Pro Bowls in each of his first three seasons. And while the Bears don’t have a first-round pick in next week’s draft, it shouldn’t stop them from using one of their second-rounders on plugging a hole along the offensive line.

As for Long being the inspiration, it only makes sense. Because rather than think about what would’ve happened had Long stayed healthy, it might be better to think of what assets made him a standout performer when he was on the field. Ideally, the Bears keep those things in mind because Long’s best traits, characteristics, and tendencies are at the core of every good lineman.