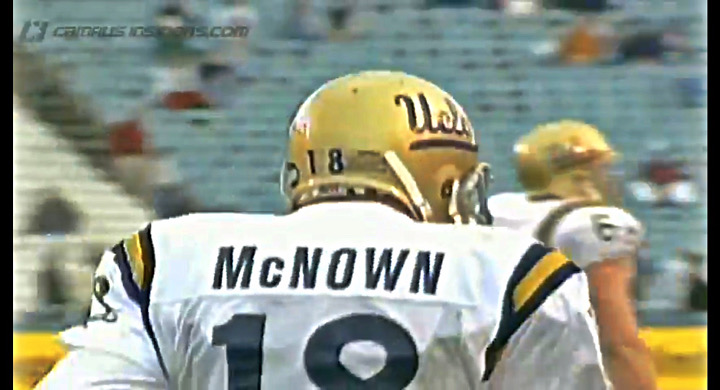 I’m kicking it old school in advance of “The Last Dance” premier on ESPN tonight, as I rock with the Space Jam 11s. If you can find a better pair of Jordans than the XIs, then I’ll just assume you’re from the future and are sharing shoes that have not been designed yet.

• The Chicago Tribune is going through its archives to unearth quarterbacks of Bears seasons past. And while you can’t tell the story of Chicago quarterbacking without Rick Mirer, my preference would be to skip that chapter altogether. Nevertheless, here we go:

With the sports world on hold because of the coronavirus, we’re looking back at every Bears starting quarterback. Next up, Rick Mirer. Mirer came to the Bears via trade with the Seahawks in 1997, costing the Bears a first-round pick. Mirer, who never put up great numbers in Seattle despite being projected as a future star, fared worse in Chicago as Erik Kramer’s backup. The Bears agreed to a 3-year, $11.4 million deal with Mirer, who lasted only one season. In 7 games and 3 starts with the Bears, he was 0-3 with 0 touchdowns, 6 interceptions and 420 yards, 37.7 passer rating. For more photos and Bears coverage, click the link in our bio. (Wes Pope photo / @chicagotribune) #chicagobears #bears #beardown #dabears #rickmirer

• The Mirer trade was the first Bears transaction that left me befuddled. In case you missed it, Chicago traded the 11th overall pick in the 1997 NFL Draft to the Seattle Seahawks for Mirer and a fourth-round pick (105th overall). When the Bears traded for Mirer, he had played 55 games (51 starts), completed 53.4 percent of his passes and had thrown more interceptions (56) than touchdowns (41). I don’t know what the Bears were thinking at the time, but I don’t want to imagine what Twitter would have been like had it been around when that deal went down.

• In addition to Dunn, Gonzalez, Glenn, and Price, there were five other players who were primary starters at their respective positions in the league for at least five years. That’s nine players who had legitimate NFL careers after being first-rounders. Without re-litigating that draft class, I’ll just say the Bears missed out on a golden opportunity to find a solid building block in order to roll the dice on a quarterback who hadn’t shown anything to prove he was worth that much draft capital.

• Well, at least the Bears didn’t roll the dice on Jim Druckenmiller, who was the only quarterback to go in the first round in 1997.

• The best QB to come from that class wasn’t selected until the 42nd overall pick. And while he wasn’t an ideal prospect, watching Jake Plummer dig holes for his team, only to lead come-from-behind wins from out of nowhere sure was fun to watch. Plummer finished his career with as many touchdowns (161) and interceptions thrown (161), but he had 20 fourth-quarter comebacks and led 30 game-winning drives.

• And to think, there’s an argument that what the Bears did to trade for Mirer wasn’t the wildest draft-related thing to happen in the 1990s. Here’s the argument:

Imagine if Twitter was around in 1999 when the Saints traded an entire year’s draft (and a 1 and a 3) to draft RB Ricky Williams at No. 5. pic.twitter.com/WzEvsTHkxh

• Maybe it wasn’t a good idea in real-time, either.

• Fun fact about that trade is that two of those selections ended up as part of a package that went to the Bears, which allowed them to take Cade McNown (I’m so sorry about how this is turning into a re-telling of the tea’s sad quarterbacking history) and D’Wayne Bates. Also selected with one of the picks was future Bears tight end Desmond Clark (who was picked by the Broncos in this draft). What a wild journey this trade turned into …

•  In the interest of fairness, at least McNown was fun to watch in college:

• Well, at least the Bears are getting this part of contract values correct:

• For your listening pleasure:

Hosts @aBlethen33 and @AjFreeman25 give their final mock draft for the #Bears on the latest Pick's For Pace podcast:https://t.co/dsQEJo78VX

In the latest episode of Hoge & Jahns, we talked with draft analyst @dpbrugler about the #Bears and their draft needs.

• Someone point Anthony Miller in the general direction of some quality wings in Chicago:

• Here’s something to help you kill some time between now and the start of “The Last Dance” on ESPN (or ESPN2):

• Some current Bulls-related content to get you through the day:

You'll want to check this one out today:

Must-Listen: Coby White (and His Brother) Open Up About Reaching the NBA, Their Late Father, North Carolina Royalty, Morehttps://t.co/82SO2jII6B