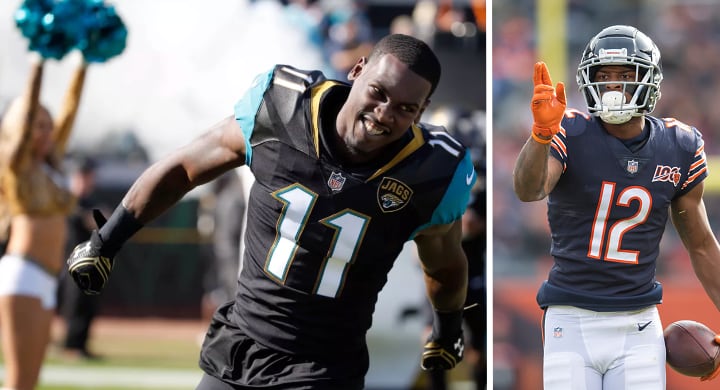 From where I stand, there is no more suggestive emoji than the eyeballs. You can have your eggplants, peaches, smiling devil-face, and whatever else comes to mind. There is nothing like a set of well-timed and well-placed eyeball emojis to set off the imagination.

So when I saw Allen Robinson’s latest tweet – after the Jacksonville Jaguars released receiver Marqise Lee – I started getting ideas:

And that same idea sure seems to be on Allen Robinson’s mind, as well.

But let’s back up, because the move does come as a surprise. Not only was Lee one of the Jaguars’ better receivers, he was also fully healthy and medically cleared before the cut. Then again, Lee, 28, was due $7 million in roster bonuses, which might have been a deciding factor in his release before the draft.

As for the possible Bears connection, Lee and Robinson were teammates in Jacksonville. In 2016, Lee caught 63 passes for 851 yards playing opposite of Robinson. A year later, Lee snagged 56 catches, gained 702 yards, and picked up three more touchdowns while Robinson was sidelined with an ACL injury. Over the span of those two years, Lee played to a 63-catch, 828-yard, 3-touchdown pace over 16 games. That’s not bad.

The Bears do have an opening at the starting receiver spot opposite of Robinson … and an estimated $9,691,921 in available cap space, per OverTheCap.com. Lee’s contract demands are unclear entering his age 28 season, but with Robinson’s stamp of approval, Lee is a free agent worth keeping eyes on for the time being.

There is a Buzz Building Around Bears Rookie Cornerback Kyler Gordon

Fergie is a Legend, Morel’s Hot Start, Extreme Winds, and Other Cubs Bullets