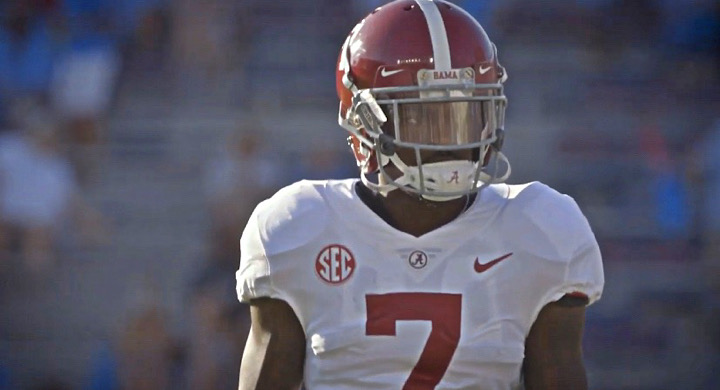 The Chicago Bears have done their fair of digging on defensive back prospects in the time leading up to the 2020 NFL Draft, making contact with at least one dozen draft-eligible players who roam in the secondary.

But one prospect not listed as having met with the team has reportedly caught the eye of someone important in the Bears’ front office. And if this players falls out of the first round, he could be someone Chicago targets with one of its second-round picks.

Alabama corner Trevon Diggs Facetimes with Falcons, Chiefs, multiple other teams needing corners in first round; if he falls to second round would be strong option for Texans, doubt he makes it to 40th. High-ranking Bears official wants Diggs @AlabamaFTBLhttps://t.co/2kRON7MH7n

The Bears aren’t alone, of course. In fact, Diggs projects to be a first-round pick. But because mock drafts and projections are fluid this time of year, Diggs isn’t a mortal lock to go in Round 1. With that in mind, some teams are preparing as if he will slip into Day 2. And if that is what happens, it sounds like the Bears will be ready.

“A high-ranking Bears executive is enamored with Diggs and wants the team to draft him,” Wilson writes, citing a source. Wilson also connects the Falcons, Chiefs, and Texans as teams keeping up with Diggs’ situation.

Diggs is a well-rounded cornerback prospect, earning our third-highest composite score when ranking the prospects at the position. He earned All-American recognition from PFF (first-team), The Sporting News (second-team), and Associated Press (third-team) as a senior at Alabama.

Diggs also has strong blood lines as the younger brother of Stefon Diggs, the former Vikings receiver who was traded to the Bills earlier in the offseason.

Between his prospect pedigree, collegiate performance, blood lines, and Alabama’s history of churning out NFL-caliber defenders (hello, Eddie Jackson), there are plenty of reasons for any Bears executive to be interested in drafting Diggs. Not the least being the team’s need to draft a starting-caliber corner after releasing Prince Amukamara earlier in the offseason.

But whether Diggs will drop to Day 2 is something that remains to be seen.