Looking for a Draft Day Trade? Ryan Pace and the Bears Are Open for Business Skip to content 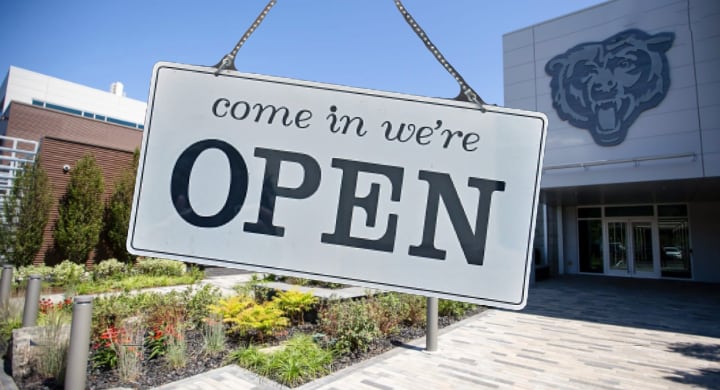 Chicago Bears GM Ryan Pace was asked how having two second-round picks — but none in Rounds 1, 3, or 4 — would impact how the Bears would attack draft weekend. And his response is an intriguing one.

Check it out, via Stacey Dales of NFL Network:

And just depending how the draft’s unfolding, we’ll know, if hey, I feel like we can move back right now, accumulating some additional picks, and still be in a good pool of players.”

To put it concisely: The Chicago Bears are open for business.

Want to trade up to pick No. 43? The Bears are all ears. Their general manager is willing to move back in the second round at the low, low price of “additional picks.” What a bargain!

Pace has traded out of similar spots before. Like in 2017 when the team traded the 36th overall pick to the Cardinals for pick Nos. 45, 119, 197, and a fourth-rounder the following year. A year earlier, Pace traded *TWICE* in the 40s in a series of moves that turned one pick into three. He’ll do it again … but only if the price is right.

Looking to move back in the draft? Pace is willing to hear you out, too. “Moving up in certain scenarios” hasn’t been ruled out. Maybe you don’t like where your team is picking? Perhaps you’re not totally on board with the best available talent when you’re on the clock? Is it possible that your team is in a good position with its long-term quarterback firmly in place and drafting another signal caller just isn’t right for your team? Well, then, pick up the phone and dial up Halas Hall. Actually, don’t, because no one will be there to answer.

Just dial up Pace’s cell. Or maybe even his home number, because he (much like many others across the country) is working from home. Does he have a land line? I’d hate to try and consummate a deal, only for a cell call to be dropped. That would be the worst!

Pace and the Bears tend to play it close to the vest on draft weekend. But the last time I recall Pace being open to trading around in the draft was in 2017. And while I realize that is a sore spot for some, remember that the Bears were able to net a pair of Pro Bowl playmakers in Eddie Jackson and Tarik Cohen in the later rounds. But for that to happen again, Pace needs to be willing to listen to offers worth fielding. And just in case you missed the memo above, Pace is *VERY* willing to listen. Call now!