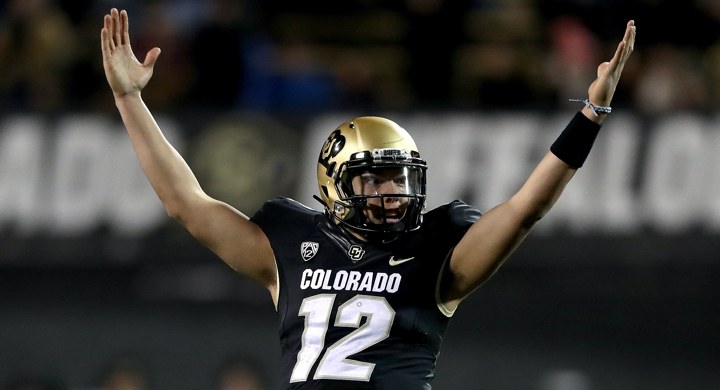 Earlier today, Bears GM Ryan Pace opened the door to the possibility of selecting a quarterback in the 2020 NFL Draft.

Could it be Jalen Hurts in the second round? Is Jake Fromm a fit? What about James Morgan as a later-round flier? There are plenty of intriguing options at the position should Chicago’s front office feel the need to throw a dart at the board. So what’s one more option?

Nate Ryan of ABC affiliate in El Paso has a scoop:

Mocks have the @CUBuffsFootball all-time leader in passing yards going anywhere from the 4th-7th rounds in this week’s NFL Draft.

Steven Montez says the Bears are among the teams who have showed the most interest in him during the pre-draft process. And this isn’t the first report to connect Montez and the Bears. Back in February, Bleacher Report draft guru Matt Miller mocked Montez to Chicago with pick No. 160 in Round 5. The draft landscape has changed a ton since then, but you can check out our write-up of that mock from long ago here.

The Bears aren’t alone with their reported interest in Montez. In addition to Chicago’s team, the Packers, Jaguars, and Titans have also kicked the tires on the Colorado product. At 6-foot-4 and 231 pounds, Montez has desirable size (by traditional standards) and has flashed plus arm strength over the years while throwing it on campus in Boulder en route to becoming the Buffs all-time leading passer. But beyond his build and arm strength, there isn’t much to write home about Montez as a prospect.

While some mocks might have Montez going somewhere between Rounds 4-7, it is possible that Montez goes undrafted. In that case, Montez would become a priority post-draft free agent. And at that point, I suppose he would be worth checking in on (if only to give Tyler Bray a run for his money as QB3).