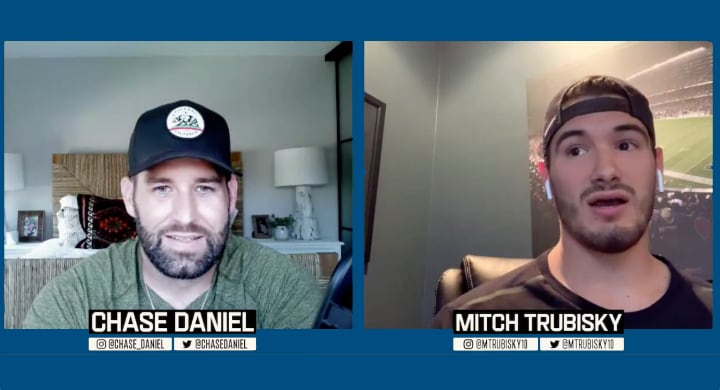 Mitch Trubisky’s first public comments since the Bears acquired Nick Foles had little to do with football.

That’s because they came on a virtual chat with ex-teammate Chase Daniel. Though the conversation didn’t center around the sport, Trubisky and Daniel offered up some interesting nuggets. Let’s highlight some.

•  Starting with the most important: Trubisky said he is “back to 100 percent” after offseason shoulder surgery. That’s a positive development. Since players aren’t allowed to be in the building during the time in which OTAs would usually be going on, health updates have been few and far between. And while Trubisky said he hasn’t been to a doctor to give him full medical clearance, he says he feels 100 percent. Good stuff.

•  So what has Mitch been up to during quarantine SZN? You know … the usual stuff stuff. After fessing up to being a “big breakfast” guy, Trubisky offered some insight into what his daily routine looks like. A morning workout, followed by a big breakfast, and some film watching. Gotta get in that film study if you’re going to master defenses and coverages, Mitchell.

•  Additionally, Trubisky has been taking time to build his home gym. Seems like a good way to pass time. Bulking up is important to protect yourself from those vicious Harrison Smith hits.

•  Trubisky said he found himself re-watching the 2017 NFL Draft when it was showed on ESPN the other day, then provided perspective from what he experienced that night. And who would’ve known it was much like many of our experiences when it happened. “I had no idea Chicago was going to pick me,” Trubisky said. “I was just surprised as everyone else. … I was probably more surprised than anyone else out there.” Ahhhh … only the Bears!

•  Trubisky isn’t one to offer up a ton of interesting personal nuggets during his media availability, but I found it neat that he shared that he is a “big music guy.” Though, I’m not sure what it says about me that one of his favorite country acts (Chase Rice) is someone I know as “the guy whose mere presence on ‘The Bachelor’ caused a whole bunch of drama.”

•  Much like anyone else with a Netflix subscription or the ability to watch ESPN, Trubisky watched the first two episodes of the last dance. The UNC product definitely loves him some Tar Heels, name-dropping Dean Smith and Roy Williams moments as some of his favorites. Though, it was this quote that made my ears perk up: “It makes me want to go pick up a basketball, start dribbling in the driveway, and shooting hoops, and dunking.”

•  He’s all yours, BN Bulls! (That is, of course, if this football thing doesn’t work out.)

•  There was plenty of coffee talk between the gents, but their taste in coffee-makers is a bit out of my price range.

•  If you want to catch it all in its entirety, here it is: