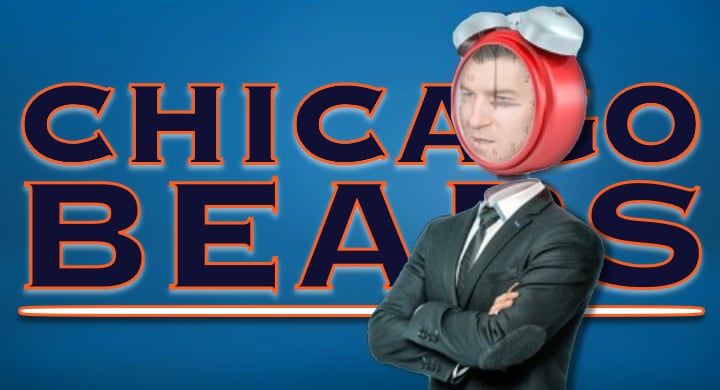 Thanks to everyone who helped me decide on which pizza to eat for the next few days as the NFL Draft rolls on. I had a local joint (one I hadn’t enjoyed in a long time) delivered to me, and it was great. Few things are as enjoyable as a tavern-cut sausage and pepperoni pizza from a hole-in-the-wall you used to order from when you worked as a porter at a car dealership. So many memories came back to me with that first bite.

•  The Chicago Bears get to make a draft pick today. Last time the team had a second-round pick, they used it on this guy:

•  Anthony Miller’s shoulder injuries are unfortunate because they have kept us from seeing g player fully unleashed. When he’s on, Miller’s route-running ability puts him in a position to get open. His on-field ferociousness and fearlessness allows him to make tough plays. Miller has the tools, but consistency has eluded him (thanks in part to injuries holding him back).

•  I expect the Bears to draft another receiver at some point this weekend. Ideally, someone who operates primarily outside, so Miller can continue to work his magic out of the slot. If it were up to me, I’d draft someone who can be interchangeable and run all the routes from every spot in a given formation. Yeah, sure, I’m asking for another Allen Robinson. Am I asking for too much?

•  Not to be overlooked, the Bears also used a second-round selection on James Daniels. When he has been allowed to settle in at guard, Daniels has been a solid player. Keeping him in one position moving forward would do wonders for his production, as well as provide stability along the line.

•  It would be neat if the Bears drafted an offensive lineman at some point over the next two days. Yes, there are challenges on the developmental curve, but the juice might be worth the squeeze here.

These Are the Best Available Prospects as We Enter Day 2 of the 2020 NFL Draft https://t.co/9OErs9gW7j

•  Indeed, it was worth it. Should the Bears pick the best players from this list, they’ll be in good shape. There are players who had first-round grades, prospects who would fit needs on the depth chart. And there is some tremendous upside to be had early in this part of the draft. The Bears could come away with two Week 1 starters if they play their cards right.

•  Everyone you expected to go went when (and where) they were expected to go. Joe Burrow is a Bengal. Chase Young went to Washington. The Lions replaced Darius Slay with Jeff Okudah. #Tank4Tua worked as Miami didn’t fumble the ball when Tua Tagovailoa dropped to No. 5. The Chargers, a team that is probably too good from a top-to-bottom talent perspective to be picking in this spot again in the near future, rolled the dice on Justin Herbert as their QB-of-the-future type. No trades and no movement made for a dull start.

•  And then the wheeling and dealing happened. The 49ers coaxed a fourth-round pick out of the Buccaneers to move up one spot (doesn’t that feel familiar?), but the Bucs ended up with the top tackle in his class. Atlanta picked a cornerback whom many draft projections had given a second-round grade. With no one to stop him, Jerry Jones took the most talented player available who played football in the Big 12. The Seahawks didn’t trade their first-rounder for the first time in nine years. That whole second half of the first round was full of surprises.

•  I’m a bit surprised the Lions didn’t make a move out of the third spot, but GM Bob Quinn told Dave Birkett (Detroit Free Press) that the team never received “a firm offer” to move into the spot. Conversations were had, but nothing came of them when push came to shove.

•  Elsewhere in the NFC North, I hate that the Vikings picked up a pair of prospects whose games I enjoyed. Justin Jefferson was a standout receiver for the LSU Tigers last year. He’ll essentially replace Stefon Diggs. Those are pretty big shoes to fill. Minnesota also picked TCU cornerback Jeff Gladney, whose skill set would have made him a solid fit across from Kyle Fuller.

•  I would have had a real good chuckle had the Vikings taken Alabama Trevon Diggs a month after trading his older brother. It didn’t happen, but it would’ve been funny.

•  The blockbuster of the night belonged to the Packers, who unexpectedly made a deal to take Aaron Rodgers’ heir apparent. Which gave me time to have fun on Twitter:

Looking into the future … pic.twitter.com/LBah1HWGSS

•  I plan on taking a deeper dive into the trade and its ramifications later today, so hold your horses.

•  Jacob Infante (Draft Wire) has a collection of the biggest steals and reaches of the first round.

•  It’s never too early to plan a Vegas trip:

•  If you want to feel some level of encouragement about sports in the future, this from Brett makes me feel better:

•  The “games and puzzles as gifts” section at Amazon has all kinds of stuff you might want just laying around at my house to play with in times like these. #ad