It's Never Too Early to Think About the Next Bears Draft, Right? Skip to content 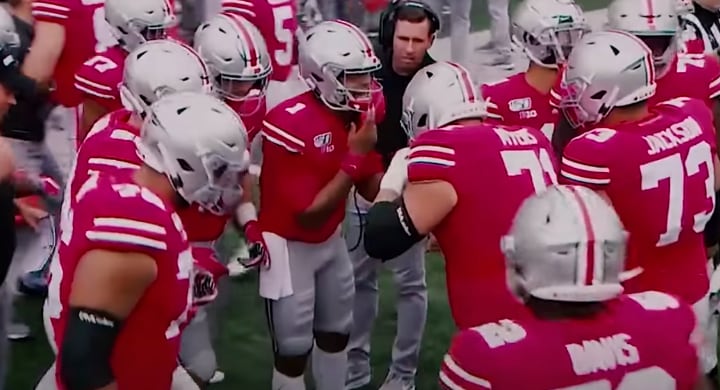 If I’ve learned anything since this (Bears) shop opened up in 2017, it’s thats it is never (e-e-e-ever) too early to start picking apart mock drafts. This year is no exception. Or, rather, next year.

Miller has the Bears taking Ohio State quarterback Justin Fields with the 13th pick in the 2021 NFL Draft. Fields projects to be among the top-rated quarterbacks in the upcoming class, and could even be in the running for the top overall selection. One online betting service has only Clemson’s Trevor Lawrence ahead of Fields as the most likely prospect to be taken first overall.

Here’s what Miller had to say about Fields as a prospect:

“Fields had an impressive breakout campaign in 2019 with 41 passing touchdowns and only three interceptions while adding 484 yards on the ground with 10 more touchdowns. He could propel himself even higher up the board if he builds upon the traits he showed in his first year starting. For the Bears, an upgrade in terms of athletic and arm strength is much needed.”

Fields was the truth last year. A dynamic dual-threat quarterback with arm strength and accuracy, as well as the ability to break down a defense with his mobility. That type of athletic profile, prospect pedigree, and leadership skills (which ultimately led Ohio State to the college football playoffs last year) should probably land Fields higher than 13th, but Miller clearly believes there are some skill-position players that should be taken ahead of the Ohio State quarterback.

Of course, picking Fields comes with a caveat. Miller bases his draft order on projected Super Bowl odds. And with the Bears picking 13th overall, that would mean a second consecutive season of missing the playoffs. If that’s how the cookie crumbles, there is a distinct possibility that Chicago’s ownership will be looking for more than just a new face-of-the-franchise quarterback.

Fields is one of four signal callers to go in the first round, joining Lawrence, North Dakota State’s Trey Lance, and Georgia’s Jamie Newman.

Assuming there’s a college football season in 2020, more quarterback prospects will likely show themselves as the season unfolds. I mean, no one had Joe Burrow going off the board with the first overall pick in the 2020 NFL Draft at this time last year. A lot can change between now and then. In the meantime, what won’t change is the Bears’ need for a long-term quarterback solution.