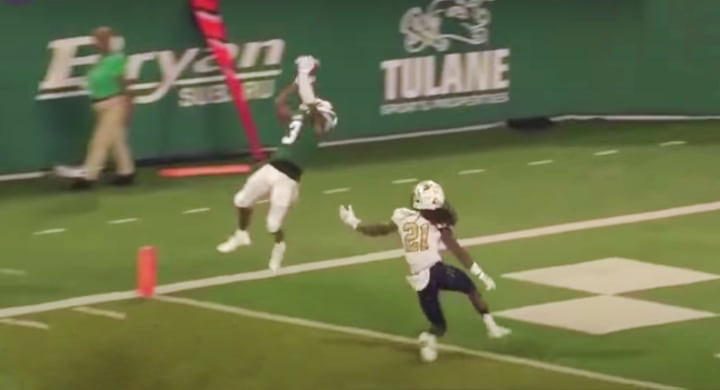 The first words out of my mouth when I saw that Darnell Mooney was a wide receiver were: “Finally, they got one!”

In a draft loaded with talented pass-catchers, I fully expected the Bears to snag one at the top of the draft. And while technically, they did that by addressing the tight end position and drafting Cole Kmet, I thought there was going to be an opportunity to select a quick-twitch athlete with big-time play-making potential earlier on. Instead, they waited until Round 5 to take Tulane’s Darnell Mooney after a trade-up with the Philadelphia Eagles.

Here’s hoping it was worth the wait.

•  “Capable of lining up inside or outside” … This shouldn’t go overlooked. Versatility is something that is demanded from receivers in Matt Nagy’s offense. Receivers are asked to know their responsibilities, and those of their teammates. It’s a lot, to be sure. But over the last two years, we’ve seen Allen Robinson, Taylor Gabriel, and Anthony Miller line up anywhere and everywhere. It is what it is.

•  “Will turn a short slant into a long touchdown” … The quick passing game took major steps back last year. Part of that was due to Mitch Trubisky’s inaccuracy, but it wasn’t the only reason. Frankly, the Bears’ lack of quick-twitch athletes put a cap on the offense’s potential and ability to take quick plays and extend them when playmakers were able to get the ball in space.

•  “Explosive speed with ability to work all three levels” … Giggity! The one aspect Chicago’s offense lacked last year was pure, raw speed. That old adage “speed kills” has never been truer in the NFL. It’s nice that the Bears prioritized it in a receiver like Mooney.

•  “Built like a stick with thin frame and limbs” … Mooney’s size is going to bring questions and concerns over durability. There’s no escaping it.

•  “In a hurry to get from Point A to Point B” … A wise basketball coach I covered in my younger years once explained to me the difference between playing fast and playing hurried. Ideally, Bears WR Coach Mike Furrey can instill the difference in the two with Mooney, which could go a long way toward maximizing his talent.

•  “Disappointing drops on shorter throws” … That’s not quite what I wanted to read after a season in which Bears receivers were among the league leaders in drops.

After Chicago cut Taylor Gabriel early in the offseason, finding another wide receiver shot up the priority list. And while I’m not totally convinced Mooney will start immediately, though there is a path for him to get there as early as some point in the 2020 season.

The Bears need down-the-field play-making ability from a speedster. Ideally, it comes in the form of someone who can stress a defense at all three levels. Mooney’s highlight reel is littered with plays in which he takes a top off the defense with a deep route, makes a solid gain a big one on an intermediate route, and turns a quick throw into a long score. Doing that in the pros will be more of a challenge than it was at Tulane, but the last offensive standout the Bears drafted out of Tulane turned out to be a good one. Chicago football fans are left to hope lightning strikes twice.