Brett Favre: Aaron Rodgers "Will Play Somewhere Else" Before His Career Ends Skip to content 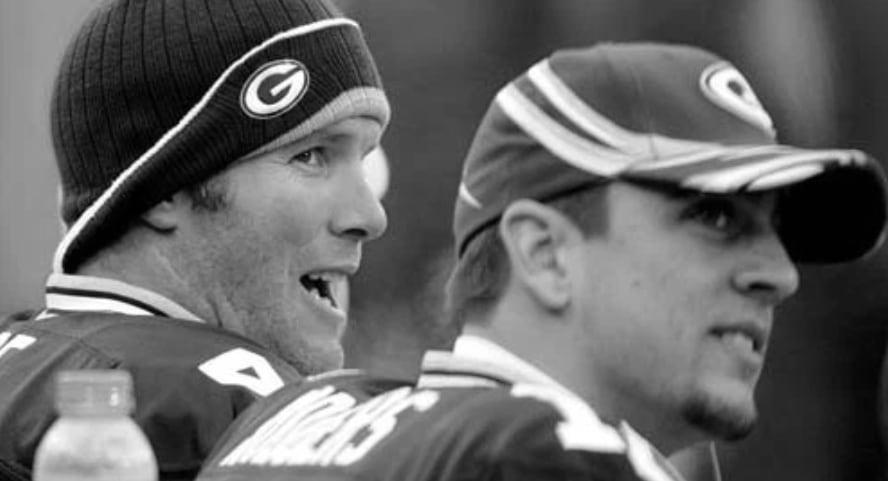 If the Packers trading *UP* in the 2020 NFL Draft to pick Utah State quarterback Jordan Love made you flash back to when the cheeseheads snagged Aaron Rodgers in 2005, you’re not alone. Drafting Rodgers started a course of events that ultimately pushed Brett Favre out the door, leading him to finish his career in a uniform other than the one he wore for the better part of two decades.

Here’s a clip from The Rich Eisen Show:

FULL CLIP of @BrettFavre saying he thinks @AaronRodgers12 will finish his career in another uniform:#Packers #NFL pic.twitter.com/7hmlV64vrN

“I think he will play somewhere else.”

Favre said he talked to Rodgers after the Packers made the Love pick, but opted against sharing specific details as far as where the conversation went. HOWEVER, Favre said Rodgers was “surprised” the team went in the direction of drafting a quarterback, while also adding his belief that the pick sent the wrong message to Rodgers. Favre added a couple of daggers, chiming in to say: “At some point it will rear its ugly head” — a reference to the drama that is on the horizon that will eventually fave the present and future quarterbacks of the Packers. And that the Packers “burned a bridge” by making the choice they did in the draft.

Frankly, since Favre is wildly qualified to discuss all of this, I think we should give his words our ears. Clearly, the guy speaks from a place of experience.

You can check out some more clips from Favre’s appearance on Eisen’s show embedded below:

"I think (the #Packers) burned a bridge that's going to be hard to overcome." –@BrettFavre on Green Bay drafting Jordan Love in the 1st Round: pic.twitter.com/2digBEEsJ6

"Our situations are so similar at this point in our careers." –@BrettFavre acknowledges the parallels with him and @AaronRodgers12 at end of #Packers run: pic.twitter.com/NbE5wOwBmt

#Bears fans…
Would you want @AaronRodgers12 to be the #Bears starting QB one day?

I feel like there’s a very obvious answer here, but I’ll let you guys make the call for yourselves.