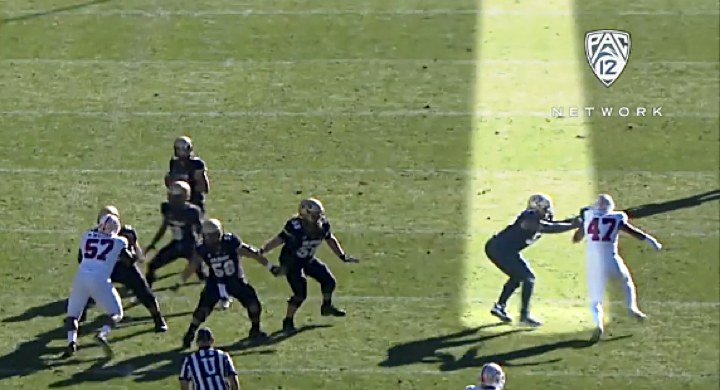 If you wanted the Bears to roll the dice on a developmental offensive lineman late in the draft, then Arlington Hambright is your guy. In addition to having a cool name, Hambright has intriguing developmental potential.

So let’s take some time to get to know one of the new guys.

•  “Sets pass-pro anchor and can generate decent push in run game” … This is certainly refreshing.

•  “Loose/athletic and can get out in front on long pulls” … I have an affinity for athletic offensive linemen who can inflict damage on plays in which they are asked to pull, so I’m digging this one-liner.

•  “Impressive redirect quickness in his feet” … So much is talked about a lineman’s size and length, but linemen with adequate feet and agility tend to have a good base to work with.

•  “Limited experience as an FBS starter” … Hambright has just 17 games over two seasons against the best of the best college competition. He also has some playing experience as a member of a top-tier junior college program, but having just two years worth of Division I experience in a power conference was reason enough as to why he dropped down draft boards.

•  “Could face difficult adjustment period against interior quickness as a guard” … Not to be unexpected from a seventh-round offensive lineman with limited collegiate experience..

•  “Footwork seemed to get a little lazy later in the season” … Arguably the most concerning “weakness” listed. Late in your senior season is the last place laziness should set in for a possible draft pick. Then again, I battled Senior-itis as a high schooler and collegian, so I can relate.

Chicago has long needed to develop its own depth along the line, particularly among its group of interior linemen. And with active rosters expanding to 55 and practice squad rosters moving to 12 (and eventually 14), I was happy to see the Bears pluck a left tackle by trade who projects to be an interior lineman at the professional level.

As Lance Zierlein points out, Hambright will need to make the move from left tackle to an interior guard spot because of his lack of size and “functional length.” But he sees the news Bears project as having “enough athleticism, power, and twitch” to play his way onto the back of the roster. From there, Hambright’s journey will begin.