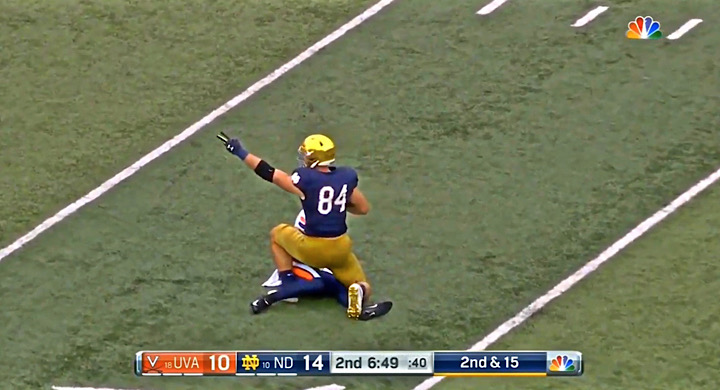 If there is an online tutorial that could show me how to make everything I cook look like a masterpiece, I would take it. The chicken parm I made last night was delightful and flavorful, but I couldn’t quite capture the right picture to bring out its excellence. So you’ll have to trust me on the taste. And, yeah, taste > looks … but I want both because I’m selfish (Michael: Presentation plays a big role in taste! I really believe that.)

•   Personally, I had (and I guess still have) mixed feelings about the Bears’ selection of Cole Kmet with the 43rd pick in the 2020 NFL Draft. My mind still debates how to find the balance between team needs and pick value relative to the draft as a whole. But every time I dive into Kmet, I come away realizing a whole lotta people have dap for the prospect from around the football community.

•   For example, Kmet’s college coach (say that five times fast) Brian Kelly has a big belief in his former standout tight end, dropping comps that will surely have Bears fans dreaming. In a piece by Colleen Kane of the Chicago Tribune, Kelly name-drops Travis Kelce, Tyler Eifert, and Kyle Rudolph as tight ends he’s had in his college program who’ve since developed into solid pros. Or in the case of Kelce, whom he coached briefly at Cincinnati, arguably the best player at his position right now. “Cole Kmet will be in line with all of those guys,” Kelly said. That’s a high bar to clear, to be sure. But then again, expectations should be high when we’re talking about the best prospect at that position in this draft class.

•   And yet, I still hate putting big-name comps on guys. Having great expectations is fine. But having out-sized expectations far too often leads to soul-crushing disappointment.

•   Connor Orr (Sports Illustrated) envisions a breakout campaign from Kmet, whom Orr believes will make an impact upon arrival. Statistically speaking, Orr might be onto something. “The Bears utilized two tight-end formations frequently on certain downs (it was their third-most utilized personnel grouping on first-and-10, for example) and he’s wonderfully improvisational inside the goal line,” Orr writes. “That will be rewarded, especially if the more mobile Mitchell Trubisky wins the job out of camp.”

•   After the pick, my mind went dow a line of thinking in which the selection of Kmet forces Matt Nagy’s hand to utilize more two tight-end packages to help with pass protection and to aid in clearing running lanes. Since the Bears haven’t addressed their wide receiver needs with more sure-fire options, Chicago’s best offensive plan of attack could be to roll with two tight ends as a base package, vary what Kmet and Graham do out of those sets, then go from there. It’s crazy enough to work.

•   Dan Pompei (The Athletic) sees Kmet as a possible game-changer for the Bears offense:

Cole Kmet is 6-foot-6 and has a wingspan of 79 inches. Inside the 20, where awards are won and epitaphs are written, he can change everything. https://t.co/AuZxVAQPXU

•   Here’s the money line for me: “The Bears drafted a tight end. But they might have acquired something else — a culture changer. This team has not had a forceful, esteemed leader who shows the way with deeds and words since the days of Olin Kreutz and Brian Urlacher. Kmet has a chance of developing into that kind of presence.”

•   I’ve long been of the belief that the Bears need a mother-clucker (or, you know something that rhymes with that) on the offensive side of the ball. If it turns out Chicago added a bit of a red-ass who can lead the charge, then this pick could turn out to be one we look back on and laugh when we think about how it was considered a reach or a pick that didn’t maximize value.

"I think this is a shockingly poor pick, they have 8 million tight ends and they have so many other needs…they (are) adding a guy that can't run..what does this solve?"

•   To that end, Brian Kelly doesn’t appreciate the sideswipe of one of his better players:

"I don't remember Mike being at any of our practices, as (Kmet) ran down the field." – Brian Kelly on Mike Tannenbaum's negative evaluation of Cole Kmet.

•   FWIW: On Draft night, Tnanenbaum tweeted that the Bears “just picked a talented player in Kmet at a position they absolutely did not need.” Which tells me that Tannenbaum hasn’t looked at the Bears depth chart recently. Just because there are 9 tight ends on a roster doesn’t mean there isn’t a need. Think of it this way: If Chicago showed up at camp with Steve Stenstrom, Caleb Hanie, Brian Hoyer, and Steve Walsh, would that mean the Bears don’t have a need at quarterback? By Tannenbaum’s logic, yes. And this is why logic should actually checked before pressing send on a tweet. But I digress.

•   Want some more positive draft-related vibes? Bleacher Report’s Kristopher Knox views the Bears’ *OTHER* second-round pick (Jaylon Johnson) as the team’s best value of draft weekend. Knox cites NFL Network insider/analyst Peter Schrager, who had Johnson mocked to the Raiders with the 19th pick. With that as perspective, getting Johnson with the 50th pick represents a tremendous value. Good job, Bears!

•   Some perspective on today’s Andy Dalton news through the lens of the Bears’ quarterback situation:

Realistically, it was always going to be Foles or Dalton. Winston was never going to be in consideration. Cam is the top option of those guys but not being able to get him a physical with your own doctors was a big problem. #Bears

Brett Favre: Aaron Rodgers “Will Play Somewhere Else” Before His Career Endshttps://t.co/insyX19Vbj

•   My apologies to our friends at BN Bulls, but we’ve already called dibs on this guy:

•   I’m looking forward to seeing how changes unfold throughout the Bulls organization: