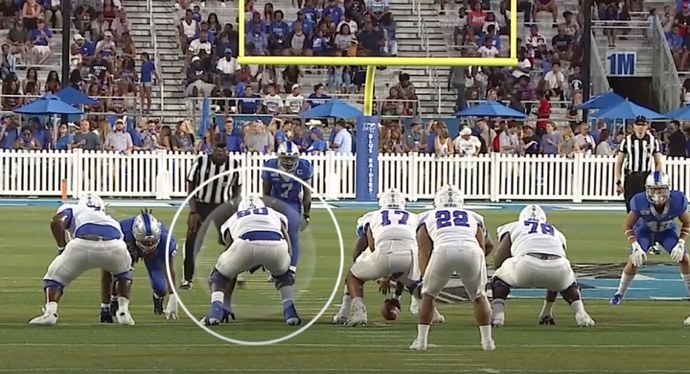 If you wanted the Bears to roll the dice on a developmental offensive lineman late in the draft, then Arlington Hambright is your guy. And if you wanted to double your pleasure, then allow me to present Lachavious “Pig” Simmons.

So let’s take some time to get to know the other new offensive lineman.

Simmons did not receive a grade, professional comparison, or have any strengths or weaknesses listed on his NFL.com Draft profile. Instead, his profile mentioned Simmons “likely needs time in developmental league.”

Frankly, that’s exactly what I would expect for a seventh-round offensive lineman.

Over at the Bears’ official YouTube page, Area Scout Sam Summerville provided a breakdown of the Simmons pick.

There were several intriguing points Summerville made, but none more than this: “He’s a really good football player. Able to play both guard and tackle. He’s a really smart guy. He’ll be able to learn all of the spots on our offensive line and be able to work wherever Coach Castillo wants to put him.”

Any seventh-round pick is going to come with considerable risk. But instead of betting on an athlete to grow into a football player, the Bears are hoping to further mold a smart football player into a better one. It’s going to be a project, to be sure — but it’s one that comes with a bet on a football player and not someone who one hopes grows into a player.

You can check it out in its entirety below:

As I wrote in yesterday’s Hambright profile, the Bears have long needed to develop its own depth along the line, particularly among its group of interior linemen. Simmons has experience all over the line and has desirable size. Those two things have me excited about what new OL Coach Juan Castillo can do to mold the new guy.

I’m not totally convinced Simmons will make the season-opening 55-man roster. It will be an up-hill climb for the Tennessee State product. HOWEVER, if Simmons sticks as a developmental lineman on the practice squad, he could land on the active roster as early as the 2021 season.