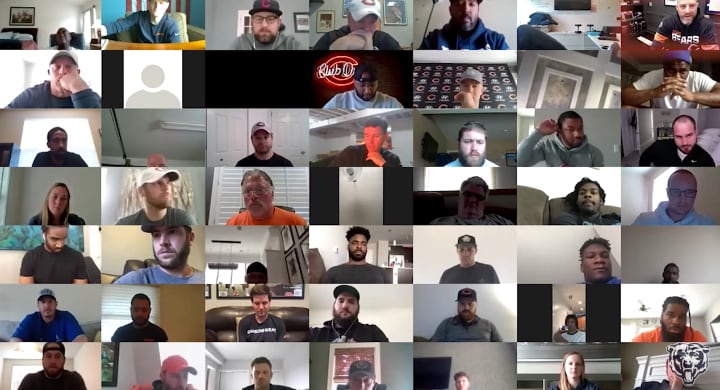 This is the time of year when I usually get some baseball to break up my football brain, but there is (obviously) no American baseball to be had right now.

So this will have to do:

Inspired by another piece, @JRFegan and I picked Cubs and Sox superteams using the best individual player seasons and then argued about who created the better group (and had a friend with a team run a sim to settle the argument). https://t.co/e0d6GC8Fa0

This reminds me of an exercise I did with some friends over Twitter a few years ago when we created a 25-man roster of Cubs/Cardinals/White Sox players from the last 25 years with the caveats of every year being represented and no repeat players. It was fun and led to some good conversations.

•   Decisions on fifth-year options are due on May 4, which means I’ll be on high alert throughout the weekend for something to come down regarding the Bears and quarterback Mitch Trubisky. GM Ryan Pace has declined to address whether the team will pick it up or decline it at every turn this offseason, but at some point, a decision needs to be made.

•   Earlier in the week, Michael offered up reasons as to why it won’t be easy for the Bears to come to a final decision (even if said decision feels like an easy one for all the obvious reasons).

•   One player whose declined fifth-year option intrigues me is that of Corey Davis (per Tom Pelissero), the Titans receiver who was the fifth overall pick in the 2017 NFL Draft, but never lived up to his draft billing. To be fair, it wasn’t all his doing. The quarterbacks throwing him the ball over the last few years did him few favors, but Davis is only a year removed from a 65-catch, 891-yard season at age 23. I’m not sure of the Titans’ long-term plans are for Davis, but a player with his prospect pedigree is one whose career tends to find new life with a change of scenery.

•   Unless it is a most egregious contract, it is a personal policy of mine to not complain about one-year deals. But not only are these deals not fitting of the egregious tag, I believe they are downright sensible. In Gipson, the Bears get a starting safety with play-making ability who can both spots deep in the secondary. Gipson slots in as the strong safety, but has coverage and ball skills that are as important to that position as they are to the free safety.

•   There have been questions of what Ginn has in left in the tank as a player in his mid-30s. Honestly, those are fair questions to bring to the table. But the clip embedded above helps answer said question, especially since it is from the Saints-Vikings playoff game played in January 2020. Based on that snapshot, I’d venture to say Ginn still has some juice in him.

•  Keep in mind that the Bears’ roster is currently at max capacity, so cuts could be coming at any given moment. Stay tuned.

•   An old friend is calling it a career:

Decided to hang my cleats up after 20 years of playing 🏈 God is good and I’m grateful!!!!!

•   Elliott Fry, the runner-up in The Great Kicking Competition of 2019, returns to the waiver wire:

•   Also, if you think Jordan wouldn’t be a dead-eye 3-point shooter in today’s game just because he played in a different era that didn’t emphasize the 3-pointers’ value, then you’re only fooling yourself.

•   Javier Baez is your favorite baseball player’s favorite player because he’s smart enough to do stuff like this in the game’s biggest moments and on its brightest stages:

Javy Baez is smarter than everyone on the field. pic.twitter.com/WV4SSLICOm